The LABC network is the largest building control provider in England and Wales and the LABC Building Excellence Awards celebrate and recognise well-built, unique and exceptionally designed properties, precise specification and highly-skilled construction. This year’s awards were celebrated digitally rather than in person, with winners announced on Thursday 27th August.

Site Manager Adam Pinder is no stranger to the LABC Building Excellence Awards after being named a winner in 2012, 2013, 2014, 2016 and 2017. This year he has been recognised for his work at Peveril’s Holborn View development in the village of Codnor, Derbyshire, after being highly commended in the Construction Professional of the Year and LABC Warranty Site Manager awards.

Both categories recognise individuals who go above and beyond the call of duty to ensure an excellent working relationship with local authorities whilst maintaining a commitment to constructing outstanding buildings.

Adam is both extremely delighted and humbled at his double commendation and acknowledges the team effort that goes into Peveril’s continued success.

“I never go on site with the intention of winning awards for the work I do, but it’s always nice when your efforts are recognised in this way,” says Adam, who is now in his 15th year as a site manager for Peveril Homes.

He continues, “It’s not just myself maintaining these high standards, the team around me, the guys at head office – in fact everyone at Peveril Homes pulls in the same direction to ensure we deliver consistently high standards within everything we do,”

“Without the right foundations in place, I couldn’t hope to be nominated for these awards, so I would like to say thank you to the wider team for their continued support in making our successes achievable.”

Speaking about the double commendation, Peveril Homes’ Director James Smith is delighted to see Adam’s name in lights once more at a landmark awards ceremony for the construction industry which this year, only announced its winners digitally in the absence of a physical event.

“The standards we set on site are incredibly high and Adam typifies all of this within his day-to-day conduct for the business. From his meticulous attention and ability to collaborate with partners and local authorities, to his pride in health and safety best practice and the quality of the end product, he is thoroughly deserving of being highly commended within both categories,”

Alongside Adam’s recognition, Peveril’s Construction Director Colin Wright has been recognised for his 45 years of industry service after taking home the prestigious Chairman’s Award. Colin joined Peveril Homes in 1987 and has been instrumental in the business maintaining its high build quality standards. The Peveril team is preparing to bid a fond farewell to Colin after he recently announced his decision to retire in September 2020.

“Colin epitomises all that is great about Peveril Homes. His professionalism, dedication and commitment to quality has really set the business apart from its competitors over the years as a name recognised for building quality homes in desirable locations,”

James continues, “Colin leaves a lasting legacy at Peveril Homes and he is thoroughly deserving of this recognition at the 2020 East Midlands LABC Building Excellence Awards. On behalf of the entire team, we wish him the very best for the future and a long and happy retirement.”

For more details about Peveril Homes and its current developments, visit www.peverilhomes.co.uk. 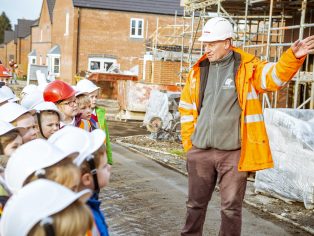