The award winning Rise development at Scotswood in Newcastle was visited by Royal Town Planning Institute (RTPI) President, Janet Askew, as part of a nationwide tour.

She said after viewing the scheme, which won the RTPI’s Excellence in Planning to Deliver Housing Award 2015:

“The Rise is an excellent example of how creative initiatives can be implemented to develop brownfield sites.”

“The community involvement has been fantastic and this visit has demonstrated how it has been championed by the scheme. Through a transparent and open approach, local people have been involved in the planning process and can see how the community has been enriched.”

“An understanding that we are developing a heart for Scotswood – not just homes – has contributed to the success of the project. We have worked closely with our partners and the existing community to establish a vibrant and exciting future for the area.”

The largest single site, housing led regeneration project in the north of England, The Rise will eventually become a diverse, sustainable community of around 6,000 people living in approximately 1,800 well designed, modern, energy efficient homes – supplied by a district heating centre.

So far 164 homes released for sale have been bought – around 85 per cent to people living within ten miles – almost two thirds of whom (64 per cent) are 30 or under. Buyers cited design, value for money and location as the main reasons for purchasing. A further 53 homes have been provided for affordable rent.

The development is being integrated into the existing community through the enhancement of existing public spaces, the creation of new ones, an improved road network and the development of new retail and community facilities.

Throughout the planning process local community representatives were involved on a steering group and have attended all the key milestone events during the development – even choosing street names with pupils from Bridgewater Primary School.

Support funding for teaching assistants here also helped the school achieve ‘Outstanding’ ratings from Ofsted – placing it in the top 20 per cent of UK schools. Pupils from the Excelsior Academy are also regular visitors to the site and have based project work around the initiative.

As well as enhancing the built environment and stimulating the local economy The Rise is creating training and job opportunities – including the creation of 14 apprenticeships to date, with a commitment to provide 75 over the term of the project.

The RTPI represents 23,000 planning professionals worldwide and promotes spatial planning, shapes policy and raises professional standards. The Awards for Planning Excellence have been run for over 30 years to recognise planning excellence.

Earlier this year The Rise won the Residential category at the Royal Institute of Chartered Surveyors (RICS) North East Renaissance Awards and was shortlisted in the Regeneration section. It was also declared to be ‘Outstanding’ in the North East Design Review and Enabling Services’ Built for Life assessment. 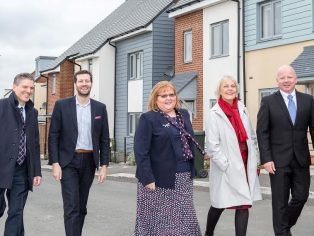