Competitive sailing and high value networking is promised this September when the 27th annual Little Britain Challenge Cup (LBCC) gets underway in Cowes, Isle of Wight. Entries are now being accepted for the property and construction industry’s 2015 sailing regatta, which is expected to attract over 60 companies and more than 750 crew.

The sailing regatta is based at Cowes Yacht Haven marina and takes place from Friday 11th to Sunday 13th September 2015. Five races will be staged over the two days, with two on the Friday and three on the Saturday. An optional warm-up race is held on Thursday 10th September.

Racing, organised by Royal Yacht Squadron Racing, is in two main classes: boats with spinnakers; and cruising for boats without spinnakers. The majority (60 percent) tend to sail in the racing class and, while some firms race their own yachts, most charter boats for the occasion.

This year, entries can be submitted on-line, or forms can be downloaded from the site and submitted the old-fashioned way. Information about chartering a boat and finding accommodation is also accessible on the website.

“Now the market recovery is well underway, we have experienced significant interest in this year’s regatta. Companies shouldn’t delay if they want to secure their place at what is a key event in the industry’s calendar.”

Since the LBCC was founded in 1988, it has raised £1.25 million for several charities, including the Ellen MacArthur Cancer Trust, Jubilee Sailing Trust, Cirdan Trust and the Paralympic British Sailing Team. 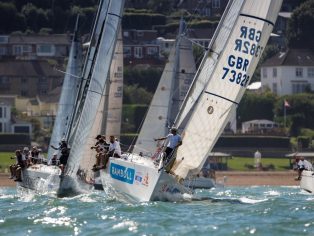