A planning application has been submitted to Gateshead Council for a transformative £35m residential-led development on the south bank of the River Tyne. Known as Brett Wharf, the proposals have been designed by FaulknerBrowns Architects on behalf of The High Street Group. They represent a major phase in the development of the wider Gateshead Quayside which has seen a radical transformation from industrial landscape, to thriving cultural destination.

The high quality mixed-use development comprises of up to 262 residential apartments for the private rented sector, as well as offices, retail, cafés and restaurants all within view of the city’s landmark bridges. The proposals deliver a place that is varied, diverse and supported by a blend of uses that delivers active and varied use throughout the day and evening.

The evolution of Brett Wharf as a development site is underpinned by a heavily industrialised past. The 0.52 hectare site, most recently occupied by the Brett Oils company, is characterised by derelict manufacturing buildings and obsolete storage tanks. Located in the ‘Bridges Conservation Area’, the condition of this highly isolated site does little to complement the neighbouring heritage assets including the Grade I listed High Level Bridge, built in 1845-9 by Robert Stephenson.

The Brett Wharf development will integrate the site back into the unique fabric of the Gateshead Quayside, creating vistas, visual links and dwelling spaces which have been missing for decades.

The position, scale and massing of the proposed redevelopment has been designed to respect the lower pedestrian deck of the High Level Bridge at its closest point. Split over two buildings, the forms rise and then fall as they move away from the listed structure. The broken form and stepped roof lines of the proposed redevelopment are echoed in plan – the structure stepping back from the water’s edge as it approaches the heritage asset, revealing it in a sympathetic manner. An active roof with broken out corners aids in the erosion of the solid form, breaking down the mass, and increasing visibility through the site to the landscape behind.

Perhaps the single most important aspect of the Brett Wharf regeneration is the activation of the ground plane across the site, which for a long time has been inaccessible to the public. The development activates a new collection of public terraces with sought-after views of the River Tyne
and the Tyne Valley, interspersed with public art installations immortalising the site’s unique story.

Niall Durney, Senior Associate at FaulknerBrowns, said: “This is a great opportunity to design a prominent piece of the Gateshead Quayside. With such a long narrow site next to the Grade I listed High Level Bridge we focused on breaking down the building into a series of well-crafted masonry blocks, stepping in height and width to animate the waterfront. The feedback we have received from Historic England has been extremely positive and this gives us great confidence as we progress the scheme.” 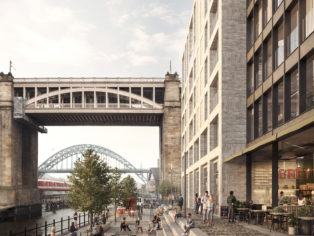 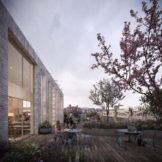 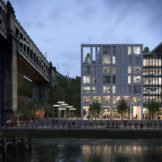