Protect yourself and your employees on-site

If there’s an accident or problem on-site, site managers will often have the job of trawling through CCTV footage, which takes up valuable time and is no longer necessary with the technology available. Worse, if the footage has been supplied by a neighbouring system, it won’t always include accurate enough pictures for evidence – that’s if it has captured what is needed at all.

With the introduction of IP video analytics, CCTV cameras can be set to focus on a particular area of a site, warehouse, office or any other area in which accidents can occur. These CCTV systems can also be programmed to include no-go zones so fields of vision are password protected, which eliminates concerns of privacy in an area.

Installers also have the ability to set up cameras so movement sensors flag up unusual activity in an area. Repetitive actions are pre-programmed, e.g. a crane in motion or a fork lift on a specific route will be ignored as part of the daily routine, while falling material would trigger an alert. Alternatively, cameras can incorporate motion tracking and lock onto a particular object like a delivery lorry or intruder.

Specialist CCTV installers can help building companies understand the different CCTV systems out there and advise them on the wide range of cameras, set-ups and features which might work for them. The correct CCTV system will make a site more efficient, and to find the right set-up the design needs to be thought through carefully and discussed with a team of professionals before plans and costs are drawn up. ‘Work smart, not hard’ applies to CCTV and there are clever tools which mean CCTV can be used in many different ways. It doesn’t have to be difficult and can help save thousands in the long run.

With a rise in ‘claim culture’ in the UK, and the ever-growing number of personal injury claim specialists being advertised, pursuing a compensation claim is becoming more popular following accidents. Companies lose thousands each year – in some cases millions – to compensation claims which could be defended if CCTV had been installed and used effectively.

The quality and complexity of new CCTV systems mean businesses can prevent huge losses if they opt for the right set up. The quality of footage varies, but there are now CCTV cameras that offer a picture that is clearer than Sky HD, and more powerful still, football stadiums use cameras which can zoom in on a crowd of people and identify individual faces and expressions. There is a system for everyone no matter what budget or purpose.

Finding an installer that designs bespoke, quality systems, mean companies can also link problem areas to a remote monitoring device so that a site manager can keep an eye on the progress, or activity in a certain area, wherever he happens to be. This is particularly useful on larger projects. The remote monitoring device (mobile phone, laptop or tablet) can bring up footage from specific dates and times like a centralised system so any progress issues or accidents can be dealt with swiftly and correctly. This technology means false claims, which are often hard for businesses to disprove and subsequently result in large pay-outs to claimants, can be defended with clear evidence.

Other issues building sites might face, along with accident claims, are accusations of abuse and misconduct. Such accusations can often lead to wrongful dismissal or victims not being taken seriously. The presence of CCTV in the workplace means that such cases are less likely to happen, and if they do, the victim has evidence to prove their claim, protecting both the employer and employee in the process.

Advanced CCTV systems can vary in cost, but installing the right system and teaching staff how to operate it efficiently and effectively means, more often than not, the system pays for itself with the savings made due to fewer insurance payouts, court cases and job losses.

Installers who provide trial systems mean housebuilders or developers can ‘try before they buy’ and see how quickly and easily a CCTV system can be designed and installed on a specific site. Many installers provide a maintenance service, which means that any problems will be repaired before they impact on the systems put in place. Trial systems also give companies the chance to test the quality of CCTV out there, how it works and how useful it can be when managing loss prevention.

The use of CCTV serves as a visible reminder to everyone on a building site that there are heightened security measures in an area and is also a timely reminder for people to be prudent about their own security precautions. 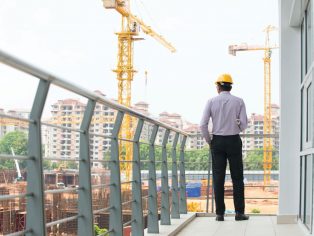