Proud to help Rachel get home for Christmas

When The VEKA UK Group heard, last year, how a Bedlington woman was left stuck in hospital after a devastating fall, the team were keen to help.

Rachel Rudd, whose husband Darren works for Renolit, fell down the stairs at their home in April. Rachel suffered a number of injuries including a broken jaw and severe bruising to her spinal cord; which sadly left her paralysed from the shoulders down. After several months, she was transferred from the specialist James Cook Hospital in Middlesborough to a nursing home in Cramlington, where she was forced to remain, as the family home was not suitably equipped for her needs.

Darren tried to secure a grant to cover the cost of modifying the house to Rachel’s new circumstances, but was unsuccessful. At this point, friends and neighbours began raising awareness of Rachel’s plight – and community-wide fundraising began, to build the ground-floor extension that the family needed in order to get Rachel home in time for Christmas.

“Our Business Development Manager at VEKA informed us of Rachel’s accident and asked whether we might be able to help with organising the windows and doors. We soon spoke to our other suppliers and, like The VEKA UK Group, they offered their full support to the project without hesitation.

“VEKA provided the PVC-U profile (free of charge) in Anthracite Grey, for five casement windows, one three-part bay window, a set of French doors and a residential door.

“Our contribution was the cost of fabrication, hardware, trims and fitting, which meant that the job was supplied and fitted at no cost to the Rudd family. I hope that, with the help of our partners in business, we might have played a small part in making a difference for Darren and Rachel and we wish them every bit of luck moving forward.”

Local Building Surveyor, Michael Lucas was involved initially with the design of the project and Ritchie Wharton, of local developers Arch, acted as unpaid Project Manager.

“The Bedlington community, and those further afield, really came together to help with this build and we were delighted to see it completed (just) in time for Rachel to spend Christmas at home with her family. As I understand it, she arrived home on Christmas Eve. The extension includes a large bedroom and en suite and the alterations on the ground floor have opened the area up to make it fully accessible for all the family members. It was a pleasure to do something to help a family that has been through so much. I know they are incredibly grateful to all the individuals and organisations that contributed.” 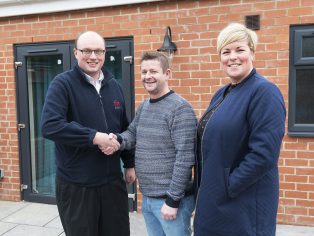 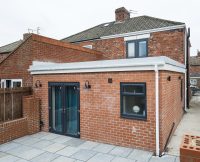