Robertson Group, one of the UK’s leading infrastructure firms, has received a record number of awards at a prestigious industry ceremony.

A total of fifteen Robertson projects were honoured in Edinburgh and Manchester at the National Site Awards, operated by the Considerate Constructors Scheme (CCS).

The outstanding performance demonstrates the continued commitment and achievement from the construction firm, with thirteen of the projects being based across Scotland.

Six sites were honoured with the highest accolade, a Gold award, at the ceremony. Among them was the ongoing restoration of Perth Theatre, one of Scotland’s oldest repertory theatres. The landmark project, led by Robertson Tayside, will see the theatre restored to its former splendour.

“It’s a wonderful achievement to be honoured for such an outstanding number of projects across our construction businesses.

“It is testament to the hard work and commitment of our employees in adhering to the highest industry standards across our sites, while acting as ambassadors of considerate construction across the country.” 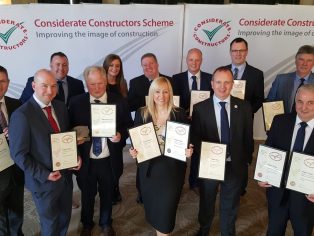