Redrow West Country has celebrated the topping out of its £70 million Plymouth development, Vision.

Exeter-based Redrow West Country, which has built hundreds of homes in the region and created more than 10 communities, welcomed guests from across the housing and construction industry to a ceremony in Plymouth to celebrate the conclusion of the biggest city regeneration scheme in the South West.

Construction started in 2007 to bring a range of stylish one and two bedroom apartments alongside 2, 3 and 4 bedroom houses to Devonport. Vision has also strengthened the economy of the area by providing shops, offices and a market hall.

The development was a major investment by Redrow to regenerate a historic part of the city. The site was the former dilapidated Ministry of Defence land and has now been transformed into a thriving new city centre community. Vision is home to 1,000 residents with 464 homes and a 42-flat Extra Care housing block for older people.

In addition to providing much needed modern, stylish new homes in Plymouth, Vision has also contributed to the South West economy by employing 50 contractors at any one time and on average, 80 jobs were sustained and supported on a daily basis by Redrow at Vision.

Redrow’s Section 106 contributions provided over £3.7 million towards education, transport and roads including new buses for route 34 and supporting public areas such as Granby Green. The house builder also invested £700,000 to support the restoration of the Market Hall and Clock Tower which is now a digital hub for Plymouth.

Redrow West Country managing director Nigel Palmer has confirmed that this won’t be the end of Redrow’s work in Plymouth.

“Redrow is delighted to be celebrating the topping out of Vision and to have played a part a part in the regeneration of the city. Redrow has an ambitious growth strategy to strengthen our presence in the region. We’re keen to find a follow-on scheme and there are opportunities we’re actively looking at currently.” 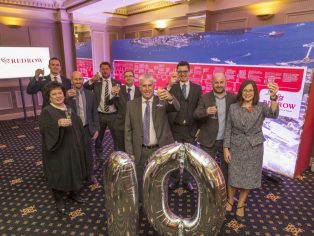