A HAT-TRICK of Redrow developments have received plaudits from the National House Building Council (NHBC) for displaying excellence in health and safety.

The developer has scooped three commendations at the annual NHBC Health and Safety Awards. Two sites in Lancashire, Harbour Village in Fleetwood and The Coppice in Banks near Southport, plus the Compton Park development in Wolverhampton, are now in the running to be named overall regional or national winners at the prestigious awards ceremony at the ICC in Birmingham on July 3.

Harbour Village, The Coppice and Compton Park are three of just 54 developments nationwide to receive commendations.

“I’m delighted that three of our developments have been recognised by the judges. It’s a real team effort and I would like to congratulate the site teams and our contractors for their hard work and determination and wish them the best of luck for the finals.”

“We continue to aim for the highest standards of health and safety. Keeping our staff, contractors and visitors safe on our building sites will continue to be a top priority for Redrow.”

To achieve a commendation, building sites are subject to multiple inspection visits carried out by NHBC health and safety advisors. Overall regional and national winners will ultimately be determined by an independent judging panel.

Site manager Stuart Bullough is overseeing the building of new homes at Redrow’s Harbour Village venture which lies next to the marina and close to Freeport Fleetwood. Also in Lancashire, The Coppice site manger Shaun Phoenix is leading the creation of new homes in the village of Banks, which is a short drive from the beaches, tourist attractions, bars, cafes and restaurants of Southport.

In the Midlands, Redrow’s Compton Park housing venture, run by site manager David Dodd, forms part of a wider £50 million scheme to regenerate the University of Wolverhampton’s Compton Park campus. Redrow Homes is one of several partners involved in the project, which also includes a football academy and a remodelled school.

For more information on the homes Redrow is building visit www.redrow.co.uk.

To find out more about the NHBC Health and Safety Awards visit www.nhbc.co.uk/HSAwards. 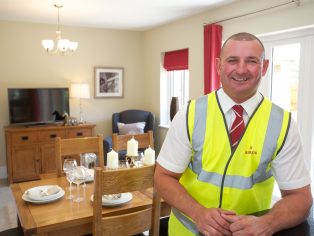 Shaun Phoenix site manager at The Coppice, Banks, one of three Redrow developments commended in the NHBC Health and Safety Awards.