Eco-minded employees of housebuilder Redrow have taken part in a ‘green day’ at the company’s Flintshire head office in a bid to reduce their carbon footprint.

Commuters swapped their cars for alternative methods of transport and learnt how to drive more economically in a driving simulator. Staff also took part in bumblebee walks around the grounds of Redrow House at St David’s Park in Ewloe to learn more about Redrow’s partnership with the Bumblebee Conservation Trust (BBCT).

In total the company’s personnel saved a total of 765 miles of car travel by opting to car share, cycle, run, walk or use public transport to get to work, and everyone who took part was rewarded with a well-deserved breakfast sandwich upon arrival.

NW technical director Paul Sinclair was awarded the prize for ‘most impressive commute’ winning a Fair Trade hamper after cycling and using the train to travel 84 miles to the Ewloe office from Wigan and back, while Group sales and marketing director Dave Bexon cycled the 60 mile round trip to and from his home in Nantwich.

Sinead Lynch, a conservation officer from the BBCT led walks around the grounds to teach employees about the importance of pollinator friendly habitats. Redrow has formed a partnership with the trust to introduce wildflower areas to its offices and developments around the country in an attempt to reverse the dramatic decline of many British bumblebee species.

Other activities to raise awareness for the environment included an eco-themed cake sale and ‘best green dressed’ competition. Lots of prizes were on offer throughout the day, including bird, butterfly and bat boxes, for employees who went the extra mile and took part in the day. All proceeds from the cake sale went to the company’s chosen charities for the year – Hope House Children’s Hospice and D.A.F.F.O.D.I.L.S.

“It was a fantastic day to raise awareness of the simple steps we can all take to reduce our carbon footprint and help the environment. Organised by our St David’s Park ‘Green Team’, our aim was to get as many people involved as possible. Every member of staff arrived to a pack of wildflower seeds and Fairtrade Green Tea on their desk and everyone who left their car at home for the day was entered into a raffle to win a prize donated by one of our generous suppliers.” 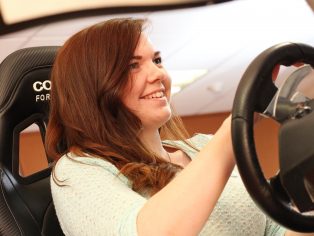