Fundraisers at Redrow Homes are all heart – they’ve raised £20,000 for the cardiac unit at Birmingham Children’s Hospital.

The generous donation follows a year-long ‘charity challenge’ as part of the award-winning homebuilder’s 40th anniversary celebrations, which saw employees take part in a range of stunts and activities to raise money for good causes.

Each of the company’s 11 operational divisions, plus employees from its Group headquarters and sister company Harrow Estates, selected local charities to focus their fundraising efforts on for the year.

The Tamworth-based Midlands team chose the cardiac unit at Birmingham Children’s Hospital as the child of a friend of managing director Darren Turk was treated there.

Jamie McLeod, whose dad Duncan went to school with Darren, was just three months old when he was diagnosed with Tetralogy of Fallot, a form of congenital heart disease. Jamie underwent open heart surgery at Birmingham Children’s Hospital and spent two days in intensive care before being moved to one of the cardiac wards.

“Supporting Birmingham Children’s Hospital as part of our 40th anniversary charity challenge was an easy choice to make and a great way of thanking them for looking after not just Jamie but so many other children across the Midlands. Visiting the hospital and meeting children on the cardiac unit really helped inspire the team and everyone embraced the challenge. For example, our technical director Mark Marsh took part in the Wolf Run, a 10k run with obstacles and lots of mud! We’ve also sold calendars, raced go karts, held dress down days and other events. Recognising that being in hospital can take away some of the magic of Christmas, in addition to the fundraising we’ve also put up some festive decorations on one of the wards and donated £1,000 worth of toys to the Christmas Let Us Play appeal which intends to transform playrooms across the hospital.”

Birmingham Children’s Hospital has one of the busiest children’s heart centres in the UK. On average the cardiac unit sees over 600 patients every year and performs a similar number of operations. Around 50% of these are on children under the age of one, making it the largest UK centre for baby heart surgery.

“The Redrow team has done a fantastic job raising £20,000 for the cardiac unit and we’re extremely grateful for their support. The cardiac unit is now considering how the money raised can best be spent to help as many patients as possible.”

For more information about the 40-year history of Redrow Homes, visit www.redrow.co.uk/timeline or for details of Birmingham Children’s Hospital see www.bch.org.uk 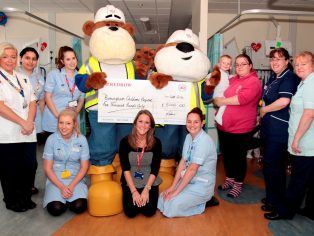