Housebuilding suffered a setback in May as contracts awarded for new build residential units reached its lowest point of the year.

According to the latest data from Barbour ABI, a chosen provider of construction data for the Office for National Statistics (ONS) and the Government, contracts were awarded to build 8,175 new build residential units in total across the UK in May, almost 8,000 units lower than this year’s peak of 15,812 units in January.

However, the construction industry is not likely be to fazed by this recent dip in figures, as early indications has shown that residential construction has had a strong start in 2015. Contracts were awarded to build 49,707 residential units in the first four months of the year, compared to 33,757 within the same timeframe in 2014, resulting in a 32 per cent increase.

“With much uncertainty looming around the general election last month and a hung parliament looking like the probable outcome, it seems likely that investors and housebuilders decided to wait for the outcome of the election before coming to a decision on significant housebuilding projects.”

“With the election now in the distant past, and the expansion of initiatives to support first time buyers, I expect house building to bounce back in June and have a strong second half of the year.” 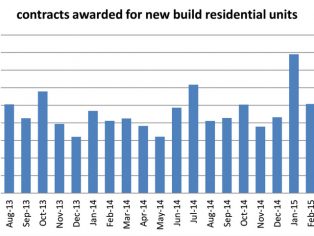