Knight Frank’s residential development land index for Q2 2013 shows that land values rose by 4% in prime central London between April and June, and that prices for greenfield land in England and Wales advanced by 1.2%. Gráinne Gilmore examines the latest market trends.

Residential development land prices rose across England and Wales in the second quarter, and at a faster pace in prime central London.

The rise in development land values reflects the increased signs of confidence in the housing market.

As a wide-ranging survey carried out for Knight Frank’s recent Housebuilding 2013 report showed, housebuilders and developers were positive about the introduction of Help to Buy just after it was announced in March.

This was prescient, as 7,000 new-build homes have been reserved and 1,000 have been sold to those taking advantage of the equity loan part of the scheme since it was introduced in April. Mark Prisk, the housing minister, called Help to Buy an “instant hit” .

This pick-up in activity has also been reflected in trading updates from housebuilders, with Persimmon, Galliford Try, Taylor Wimpey and Redrow reporting better than expected results for the first half of the year.

Policymakers have emphasized that Help to Buy is designed to help encourage development – but some commentators have expressed disappointment that housebuilding levels have not yet improved.

Given that the scheme has only been in place for around four months, it is too early to expect a rise in this measure. But anecdotal evidence, including reports of brick and blockwork shortages, suggest that construction activity is on the rise, and this was confirmed in the rise in construction output seen in July’s GDP figures.

The increased demand for housing also suggests that housebuilders’ cost of capital will be curbed, given the faster sales turnover they can expect, allowing some room for land prices to rise.

Knight Frank’s latest house price sentiment index show that households across the UK are feeling much more confident that the value of their home is starting to rise. The growing optimism will help encourage movement in the market, aided by the arrival of more firsttime buyers thanks to Help to Buy, which will go some way to ‘unblocking’ the housing chain. As a result of this, combined with other market factors such as low interest rates, last month Knight Frank revised its forecasts for UK house prices.

The planning system remains a form of barrier to development however. As the National Planning Policy Framework (NPPF) beds in, a time-consuming trend for ‘planning by appeal’ has emerged.

Developers and housebuilders also remain concerned about the Community Infrastructure Levy (CIL), and policymakers may need to be aware that this additional charge for developers could act as a partial brake on development activity.

In central London, prices of luxury houses continue to climb, with values rising 6.9% in the year to the end of June. The wider London property market has also come to life over the last year, with average values up around 5%. Compared to the rest of the UK, this outperformance has attracted much attention from developers and housebuilders. Add to this the expected undersupply of housing in the capital, and the large scale re-generation and infrastructure projects which are underway – Crossrail for example – and the reasons underpinning the rise in the value of residential land in the capital become clear. 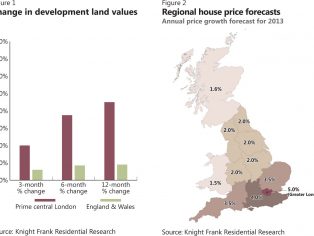 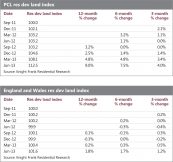