The 1% growth in the value of development land in England and Wales between April and June matches that seen in the first three months of the year, although it marks a slight decline from the quarterly growth in the second half of last year. The increase in land values mirrors the growth seen in house prices over the last year, and as the map below shows, the pace of growth in land prices is also regionalised, just like house prices. The biggest growth in land values has been seen in prime central London, where urban development sites climbed by an average of 6.7% in Q2.

Brownfield sites outside PCL in Greater London have seen the next biggest rise in values, climbing by an average of 14.2% year-on-year. Yet it is not just a case of a north-south divide in land price movements. While greenfield site values in the South East have risen around 3% on the year, those in the North West are up by 6%.

The values in the North West are rising from a lower base per acre, but nevertheless, this increase underlines a return of investment into these markets.

The housing market has picked up over the last 18 months, not only in terms of prices, but also transactions, with the number of new home sales up by 18% in the first quarter of this year compared to the same period last year, according to Land Registry data.

The Council of Mortgage Lenders reported that in June, its members advanced the highest number of loans to first-time buyers than at any time since December 2007, underlining the depth of pent-up demand in the housing market. The Help to Buy Equity Loan has helped uncork this demand, especially in the North and Midlands.

This has been reflected in robust sales volumes reported by housebuilders in their half-year results. But some developers have noted that the pace of growth in demand may be starting to slow. This could be partly due to the lending market adjusting to recent policy developments. There have been several high profile changes to the mortgage market recently, including April’s Mortgage Market Review, and new rules from the Bank of England’s Financial Policy Committee on lending limits.

Developers have also been facing increased build costs over the last year or so, as the turnaround in construction activity has put pressure on supply. This is likely to remain the case for some time, and construction cost inflation, ranging from the cost of materials to wages for workers, could in some cases act as a dampener on land prices. 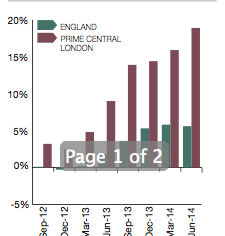