RTPI London Launches ‘Kaleidoscope City’ in Honour of its Centenary

The Royal Town Planning Institute (RTPI) in London and Colliers International celebrated one hundred years of professional town planning last night with the launch of a new publication, Kaleidoscope City: Reflections on Planning and London.

How should London accommodate the two million new residents anticipated by 2030 when England is nationally building less than 100,000 new homes per year? What are the impacts of growth likely to be on Britain’s great provincial cities, or the grain of local development and occupation in London itself? Kaleidoscope City is the first publication to exclusively unveil the manifestos of the most celebrated practitioners and theorists in the built environment today to tackle these questions, including:

The collection of 25 essays has been commissioned, edited and published by Jonathan Manns, a prominent British Urbanist and Associate Director, Planning at global property advisors, Colliers International, in conjunction with the RTPI London. Manns is a member of the Editorial Board of the Journal of Urban Regeneration & Renewal and has commented extensively in Europe, Asia and the USA. He sits on various professional committees in London and internationally, as well as being an RTPI Ambassador, Expert Advisor to Grand Designs Live and Trustee of the London Society. Kaleidoscope City is now available in both printed and electronic formats.

Championed by Sir Edward Lister and internationally well-received, the launch of Kaleidoscope City commences a year of special centenary events which will debate and discuss present and future issues in the planning of the capital, a hundred years after the founding of the RTPI and 70 years after the Greater London Plan published by Sir Patrick Abercrombie.

The RTPI London will also be holding monthly themed events and study tours, based on the content of Kaleidoscope City, focusing on a range of issues including housing, infrastructure, urban resilience and suburbs/green belt culminating; in an annual planning summit in November 2014 that will look towards the next 100 years of planning in London.

“Positive planning has never been so high on the Government’s agenda and for this reason, Kaleidoscope City has been launched to drive debate so that we may achieve a more prosperous economy for the region and the country as a whole. We will be looking at the legacy of this document and, given the commencement of the London Plan Review next year, will be considering ideas for a new Abercrombie plan in the future. We are looking forward to an exciting year filled with events to celebrate the achievements of planning over the past 100 years and those that have made it possible.”

“All those with, not only a professional, but a personal interest in the growth and development of the cities in which they live will find much to stimulate their thinking in this book. It directly tackles and steers debate on the emotive and critically tough questions the UK currently faces regarding the design and development of its cities, with particular regard to London. Thanks are deserving of all contributors for providing such stimulating content, each element of which offers significant opportunity for discussion and provides a new energy to issues at the global, national and local level.” 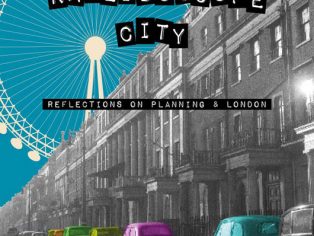