A proposed new housing settlement on the outskirts of York has increased its affordable allocation from 30% to 40% which could mean the delivery of over 700 new homes for low income families within an imminent timescale.

The announcement comes as scrutiny over the Local Plan intensifies and York City Council remains under increasing pressure to find viable sites for new housing provision.

Galtres Garden Village is a proposed development of land to the north of North Lane and Monk’s Cross and includes the delivery of up to 1740 new homes that can be delivered over the next ten years. Crucially, this includes over 700 affordable units and pays particular attention to provisions for the elderly with more than 290 retirement homes and a 64-bed care home.  Modern amenities supporting the new settlement will include a community hub, village green and recreation facilities, a school, surgery, shops and country park.

A partnership with Home Housing allows the scheme to offer mixed tenure housing with a variety of home ownership and rented options and includes a varied selection of house types, from bungalows to larger detached properties.

The Galtres Garden Village Development Company (GGVDC) which is behind the scheme believes that is has the right solution to the challenges faced by York City Council and the housing deficit within the plan.

“York is currently under pressure from the Government to address a significant shortfall in the current Local Plan which proposes 870 new homes every year until 2032.  This may drop further as the council now wants to remove the Queen Elizabeth Barracks site from the draft plan.  But figures from the Department for Communities and Local Government (DCLG) say the city actually needs 1,070, leaving a shortfall of more than 200 a year.

“In 2018 two independent inspectors appointed to examine the plan outlined significant concerns and asked for clarity regarding the council’s stance on the objectively assessed need for housing (OAN) and an adopted plan for Green Belt allocation. Subsequently on 10thJune the council entered into a six-week public consultation process before the inspectors examine the plan at public hearing sessions later this year.  This consultation ends at midnight on 22nd July and we want our scheme to be adequately considering before that deadline.

“We believe that the Galtres Garden Village proposal not only addresses the shortfall allocation in the Local Plan as well as the further deficit by the loss of the Queen Elizabeth Barracks site, but also ticks all of the right boxes aligned to affordability, provisions for the elderly and the Green agenda.”

Such is the conviction that these proposals are exactly what York needs, GGDVC commissioned independent research to back it up. The report concluded that there is an overwhelming demand for new homes in the city and more affordable homes in particular. It also showed that the majority of people surveyed feel that homes for the elderly are much needed and high-rise apartment schemes should not be a priority.

“Instead of consulting with a small localised audience we have taken it upon ourselves to invest considerably in this piece of research which presents solid evidence of what the people of York from all wards and every circumstance want and need.

“We have brought forward proposals for a new garden village concept that can deliver exactly what is required and critically we can deliver this in a ten-year timeframe.  Our site is located in one of the most accessible areas on the outskirts of the city, where infrastructure and transport has capacity for improvement, and perfectly reflects the values of the Joseph Rowntree legacy to create an inclusive new, self-contained, sustainable community”. 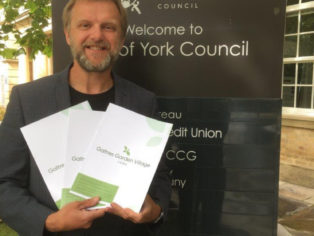