SE Controls gets switched on with Bristol’s Electricity House contract

Originally designed by acclaimed architect Sir Giles Gilbert Scott in the 1930s, the six-storey Grade II listed building is being converted into 85 luxury city centre apartments, while ensuring that many of the original design features are reinstated to enhance its art deco style.

Electricity House’s main atrium is at the heart of the SE Controls solution, as the smoke ventilation system is designed to vent smoke from the atrium in the event of a fire to ensure escape routes are kept clear.

To achieve this, SE Controls is designing, installing and commissioning the system, which comprises 37 SHEVTEC® automatically controlled louvres that are manufactured and tested in accordance with BS EN 12101: 2. The SHEVTEC® louvres also incorporate ‘fall protection’ to increase safety, as well as using IP rated external motors, which are essential to allow easy access for future maintenance.

In addition, 21 low level air inlet louvres and linear door actuators also form part of the system, all of which are controlled by a series of OS2 control panels with integral battery back up and fully compliant with the relevant sections of the BS EN 12010 standard.

“Electricity House is a landmark building designed by a giant of British architecture, so we’re naturally delighted to be involved in the project and look forward to its completion, which is scheduled for later this year.

“Smoke control and fire safety is not only a core part of our business, but also an area we’re very actively involved with via organisations such as the Smoke Control Association, FIRAS and British Standards, to ensure that design, manufacturing, installation and maintenance standards are constantly being maintained. Although this is important for the industry, the real benefit is for residents who rely on our systems for failsafe performance, if a fire should occur.”

Further information on SE Controls’ products, solutions and projects can be obtained by visiting www.secontrols.com or calling 01543 443060. 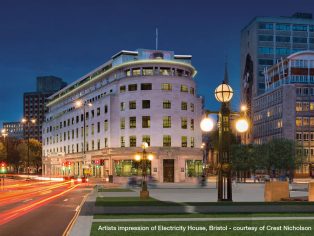