Developers are being sought to transform a derelict site in Portsmouth as part of the first stage of a regeneration project which aims to bring more than 1,500 new homes and jobs to the city.

The Homes and Communities Agency (HCA) is seeking a development partner to build and market the first 80 new and affordable homes at its site in Tipner.

The marketing campaign to seek interest from prospective partners started on 15 June. It marks the most significant step yet for former PD Fuels site, which has stood largely derelict and underused since 2006 as plans for its long-term future have been developed.

It forms part of a wider scheme for the Tipner area, which aims to bring up to 1,600 new homes, employment space to support 1,500 jobs and improved transport links and motorway connections to the city. Work by Portsmouth City Council to create a new motorway interchange and park-and-ride is underway.

The site has undergone an extensive clean-up over the last year, which has seen the HCA invest around £3m in preparing it for residential development. This work has been carried out by specialist construction company The Tamdown Group, who have worked closely with local residents to keep them informed about progress on the site over the last year.

“This first phase of development marks an incredibly important step for a project which stands to make a hugely positive contribution to the local community and wider economy over the long-term. It will set the standard and tone of the rest of the development and demonstrates to those who have backed the project for so long that progress is being made. This is a complex project, which has required a great deal of work to get to this stage. I am confident that prospective partners will see what a fantastic opportunity this represents to be part of an exciting scheme that has the potential to regenerate the area for future generations.”

Head of Stamshaw Junior School Simon Cattermole has closely followed the work taking place immediately behind his facility. He said:

“We’ve had regular contact with Tamdown while work has been taking place over the past year. They have come to the school to speak to the children about their work and we’ve had some pupils visit the site to see this for themselves. The work is something that needs to happen for the good of the area, because there is a real long-term gain in creating new homes here where people will want to live. People have been very supportive of the idea of improving the area. It’s good news that further development is about to progress.”

“We’re working closely with the HCA and the other major landowner in the area, the Tipner Regeneration Company, on the transformation of the neighbourhood. We welcome the progress on the PD Fuels site and the HCA’s major contribution to the overall Tipner project. Tipner will be an important new residential and employment area at the gateway to the city, with major new transport infrastructure and waterside developments. It is a major part of our plan to bring £1bn worth of investment into the city. The new motorway junction will enable more development in the area, and the park-and-ride will cater for visitors to our new-look city centre, which is being planned now.”

The council started work in January this year on the construction of a new junction and bus lane along the M275 which will support the long-term development of the new gateway to the city. This work is scheduled for completion early next year.

Expressions of interest from developers and registered providers of affordable housing to work together to bring 80 homes to the 1.7 ha site should be made to portsmouthgateway(Replace this parenthesis with the @ sign)deloitte.co.uk 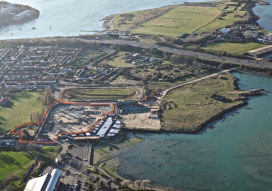