Households perceived that the value of their homes rose in September, for the sixth consecutive month, according to the House Price Sentiment Index (HPSI) from Knight Frank and Markit.

More than 21% of the 1,500 households surveyed across the UK said that the value of their home had risen over the last month, while 5.7% said the value had fallen, giving a HPSI reading of 57.9 (see figure 1).

This is up from August’s reading of 55.3, and marks the highest reading since the index began in early 2009. On the smoother three-month rolling average, the reading has risen to 56.7 in the three months to September, up from 52 in the previous quarter.

Since the inception of the HPSI, the index has been a clear lead indicator for house price trends. Figure 3 shows that the index moves ahead of mainstream house price indices, confirming the advantage of an opinion‐based survey which provides a current view on household sentiment, rather than historic evidence from transactions or mortgage market evidence.

The future HPSI, which measures what households think will happen to the value of their property over the next year, rose again in September to a its highest since January 2010, reversing the slight dip seen in August.

On the smoother three-month average basis, the future HPSI reading was 68.2, the highest level since the index began, up from 63.1 in the previous three-month period.

Respondents in all regions expect the value of their property to rise over the next 12 months, but there are significant differences between many regions in the North and South. Those in London (80.1) and the South East (71.4) expect the biggest rise in prices, while households in Wales (64.3) and the North East (64.4) anticipate the most modest increase in values.

Mortgage borrowers are the most confident that prices will rise over the next year (75.8), followed by those who own their home outright (74.6). Those who are renting are the more downbeat about the future movement in house prices (55.6).

This ‘age-gap’ is also mirrored in earnings data, with the highest earners (earning more than £57,800 a year) expecting the largest increases in prices over the next 12 months, with a reading of 79.9, although this is down from the record high of 81.1 seen in July.

“The HPSI reflects the rising confidence in the housing market which has emerged during the summer months.

“While the headline future index has reached a three-and-a-half year high, the regional picture remains mixed, with London and the South East leading from the front.

“This reflects how the market is receiving the biggest boost where there is most demand for housing. This demand is not only underpinned by the strong economic base in London and the South East, but also by the fact that there is more housing equity in these regions, which in many cases may be filtering through to the sales market via the Bank of Mum and Dad.

“The housing picture is brightening across the rest of the regions too, albeit at a slightly slower pace. The UK market has certainly been boosted by low bank rates, Funding for Lending, which has helped drive down mortgage rates, and Help to Buy. The rising levels of activity in the market are feeding back into confidence levels among households. More positive economic news will strengthen this trend.”

“Some 47% of people expect prices to rise over the coming year compared to just 8% anticipating a decline, which is the most positive overall picture we’ve seen since we started collecting data back in 2009.

“While London and the South East remain the most buoyant in terms of house price sentiment, expectations of house price growth over the coming year picked up in all other regions in September, jumping to the greatest extents in the North East and North West.” 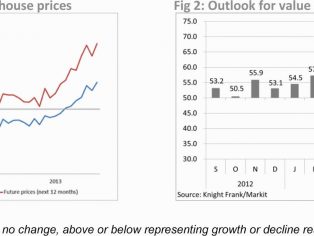 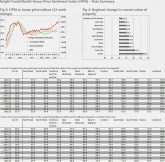