While several buyers had the confidence to reserve a new home at Cransley Green ‘off plan’, others were keen to see inside the showhome before making a commitment.

In the first few days alone more than 70 people have viewed the four-bedroom detached Cambridge showhome. It’s paved the way for further sales, bringing the tally of homes sold to eight, with a further 10 properties subject to ‘early bird’ reservations. The latter gives purchasers first refusal when the home they want to buy comes onto the market.

“We’ve had lots of positive feedback from those who’ve taken the early opportunity to view the Cambridge showhome at Cransley Green. People love that the homes we’re building look traditional from the outside but are bright and modern with a high specification inside. The open plan layout with combined kitchen, dining and family room is a firm favourite and people can really imagine themselves living here.

“The Hip Smart system is a real talking point; homebuyers are impressed by the idea of being able to stream music throughout the property through discreet speakers from a central hub under the stairs.”

There are just 42 homes for private sale at Cransley Green, ranging from two to five-bedroom properties.

Designs are from Redrow’s sought-after Heritage Collection of traditional looking homes. Inspired by the architecture of the Arts & Crafts era, they will offer the charm and character of ‘period’ properties, with the style and convenience of being brand new. 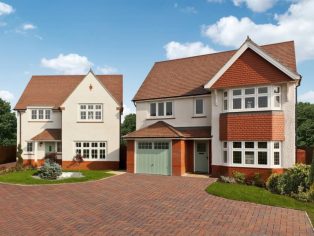