Sky-scraping the barrel: Have we reached the height of silliness?

Building up is not new. In fact, the race for the tallest building in the world has been with us since humans built structures. The Great Pyramid of Giza in Egypt, completed in 2560BC, originally stood at 481.4 feet (147 metres) establishing it as the tallest structure in the world for close to 4,000 years, before being overtaken by the Lincoln Cathedral in the 14 th century.

However, it wasn’t until 1885 that a humble home insurance building in Chicago became the world’s first skyscraper, rising to a then-impressive height of 10 storeys. It increased to 12 in 1890, standing at a mere 42m (138ft), and since then, the era of expanding up has only intensified. Within the space of just a few years in the 1930s, the world’s tallest building was surpassed three times in New York City – starting with the 282.5m (926ft) Bank of Manhattan, to the 381m (1,250ft) Empire State Building in 1931. By today’s standards, these are relatively average, especially considering that Dubai’s Burj Khalifa is now the world’s tallest building with the highest occupied floor in the world, reaching an incredible 828m (2,717ft). In less than two short years, even that is due to be eclipsed by the Kingdom Tower in Jeddah, which will reportedly reach 1005m (3,300ft) – almost one kilometre – when complete.

The result of this upward trend isn’t just taller buildings but completely new categories: the “supertall” (over 300m (984ft) in height) and the “megatall” (anything over 600m (1,968ft)). But it’s not just height that’s evolved over the decades. Today’s tallest skyscrapers are new in every respect: new materials and new structures, leading to innovative inventions to cope with the creative plans, all designed and tested with new methods.

So why did we start making use of real estate in the sky as opposed to building out? In the mid-1990s, there was an economic shift which was critical in unleashing the supertall revolution, namely consumer demand. While skyscrapers were originally primed as office space, demand soon spread to mixed-use developments, which held many benefits including greater housing variety, more compact developments and reduced distances between housing and businesses.

Growing upward is seen as a smarter, more sustainable option than sprawling outward and skyscrapers are increasingly common where land is limited, in particular, urban city centres. Already more 54 per cent of the world’s population live in urban areas; by 2050, this will have risen to 66 per cent. In a world of ever-reducing space, a skyscraper is an efficient way to create properties without too large a footprint, which may explain why people think this is an effective solution to the housing shortage. It is interesting then that a recent survey by Ipsos MORI 3 found only 11 per cent of Londoners believe that going tall will help alleviate the current housing crisis and more than 60 per cent say that skyscrapers will mostly benefit wealthy foreigners.

Perhaps then, one of the reasons these megatall buildings are rising in Asia, while Europe trails behind, is simply because we don’t see them as fit for purpose? Or is it because skyscrapers, in addition to providing extra real estate, give rising powers a symbol of wealth and progress? Since the early 2000s, Asian countries – particularly China – have acquired the capacity, resources and vision to create competitively tall skyscrapers. Now, of the top 20 tallest buildings, four are in the Middle East, four in the US, and the remaining 12 spread across Asia. The buildings don’t just have high price tags, they also incorporate cutting-edge scientific advances. To build structures that comfortably fit into an urban environment and remain stable as they continue to reach dizzying heights, architects rely on new technological applications. Such innovations could give a building illusion of invisibility 4 and engineering innovations which may eventually include magnetically levitating lifts.

Buildings like the Burj Khalifa and the Shanghai Tower, are often called vertical cities. In Hong Kong, the 484m (1,588ft) International Commerce Centre has its own airport rail link; that, combined with a high-end shopping centre, hotel and office space inside the tower means visitors can fly into the city, spend their time in the building and never take a breath of local air. Whether we like it or not, that’s the promise of the supertall skyscrapers of the future.

Will this race ever stop? Not in the foreseeable future at least. Though we assume that a general consensus might agree an upper limit, there are already innovations to take the skyscraper to the next level; including the proposed plan for The Big Bend, a 4,000 foot (1.22km) U-shaped skyscraper which is deemed to be the longest building in the world, and a design for a sunken “sidescraper” bordering New York’s Central Park, which won first place in the eVolo Skyscraper Competition last year.

With the focus on building more homes to cope with our rising population and changing structure, innovative ideas on how to accommodate homes should be welcomed. But will the outcome of reaching the height of silliness lead to developers finding ways to build length instead of height? Or will we start building down instead of building up? Only time will tell. 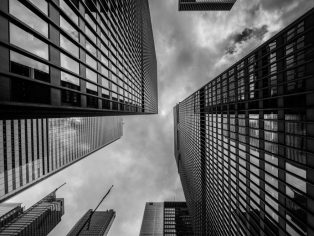