Springfield Properties, a leading housebuilder in Scotland offering private and affordable housing, is pleased to announce its intention to seek admission of its Ordinary Shares to trading on AIM, a market of the London Stock Exchange (“Admission”). Nplus1 Singer Advisory LLP (“N+1 Singer”) is acting as Nominated Adviser and Broker to the Group in relation to Admission.

Springfield Properties plc is an award winning housebuilder focused on developing a mix of private and affordable housing in Scotland. The Company was founded by Wilfred Adam, the grandfather of Sandy Adam, in 1956 when he established the Company, Springfield Market Gardens (Elgin) Limited, a market garden business. Sandy Adam began running the business in the late 1980s and in 1988 Sandy focused the Group’s business activities on developing private housing. Since 1988 the Group has developed over 4,000 homes and now operates through two divisions: Private Housing and Affordable. Based in Scotland, the Directors believe the Group is well positioned for future growth having secured a land bank of approximately 10,500 plots as of 31 August 2017, of which 41.4 per cent. have planning permission, equating to approximately 17 years of development at current levels of activity. The total land bank increases to over 12,000 plots with a GDV of over £2 billion when including the Group’s unallocated land bank. The Group currently operates on 29 active sites and has 33 planned future sites in its land bank.

The Directors believe that the key strengths of the Group include:

Rationale for admission and use of proceeds

Over the past 4 years the Group has secured land or entered into other arrangements relating to the development of 5 Villages with an estimated GDV of £1.5 billion. The development of these Villages is expected to involve significant net cash-outflows in relation to land purchases, remediation works and infrastructure of between £8 million to £12 million per site. The net proceeds of the Placing, together with the Company’s debt facilities and internally generated cash, will be used to realise the value of the sites already secured by the Group through the development of the five Villages.

“Throughout our history, Springfield’s strategies have achieved our aim of steady growth, doubling the company in size every five years. Our turnover exceeded £100 million for the first time this year and now we employ around 500 people. This IPO is the next step in our growth.

“Raising these funds is part of our strategy to secure ongoing growth at the same rate. The new funding will enable us to invest in the infrastructure of five new Villages in Scotland, and in existing sites, accelerating the delivery of new homes, private and affordable, in new communities.

“Scotland needs more homes countrywide and Springfield is poised to play a significant part in delivering these homes for private individuals and across all tenures in the affordable and social housing sector.” 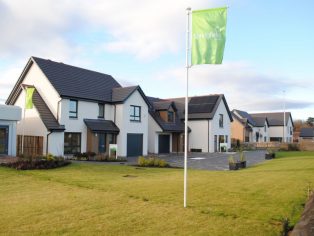