Norbord has supplied 11 packs of its market-leading SterlingOSB to help a pioneering Scottish charity build accommodation for the homeless in Edinburgh.

Social Bite is not a conventional charity but one of a new breed of ‘social businesses’, genuine trading entities that plough all of their profits into projects designed to benefit society.

Social Bite, which describes itself as “a sandwich shop with a difference”, was set up in 2012 by Edinburgh University graduates, Josh Littlejohn MBE and Alice Thompson, to raise money for Scotland’s homeless.

It does this partly by giving away 100 per cent of its profits to selected charities, but it also works to provide employment for people and get them off the street. A quarter of Social Bite’s employees have struggled with homelessness.

The business’s latest scheme is to provide actual accommodation. The custom-built, relocatable NestHouses will each comprise two sleeping compartments with central bathroom, kitchen and dining rooms.

Designed by Jonathan Avery of Tiny House, Scotland, and built by Carbon Dynamics, the 11 NestHouses are made from natural sustainable, healthy materials including the SterlingOSB3 supplied free of charge from Norbord’s Inverness plant which is a short hop from Carbon Dynamics’ Invergordon factory.

“It’s not a massive amount of material, a few hundred sheets, but you can do an awful lot with those,”

The 11 NestHouses will provide homes for 22 people on a temporary site in Leith, donated by the City of Edinburgh Council.

“People who are on the streets are in a trap – if they don’t have an income, they can’t afford accommodation and they can’t get a job if they have no address,” explains Maurice.

“Norbord was attracted to the Social Bite Village initiative for a number of reasons, not least because providing accommodation in this way actually makes economic sense for the City of Edinburgh Council.  We also had the opportunity to support one of our most innovative customers, Carbon Dynamics, and BSW Timber Ltd, a major supplier of raw materials to Norbord’s two factories in Scotland.”

Social Bite has five sandwich bars/coffee shops – two each in Glasgow and Edinburgh and one in Aberdeen – plus a restaurant in Edinburgh. Besides re-distributing profits and providing employment, the business has a following of regular donors (who are usually also customers) and it operates a ‘pay forward’ scheme whereby customers can pay in advance for a meal that can later be claimed by a homeless person.

The pioneering work of Social Bite has attracted the endorsement of several A-list celebrities; Hollywood stars Leonardo DiCaprio and George Clooney make a point of dropping in for lunch whenever they are in town.

In December 2017, Social Bite organised Sleep in the Park, the world’s biggest-ever mass sleep-out to raise money for, and awareness of, the homelessness problem. Over 8,000 people (including Scottish Deputy First Minister, John Swinney) slept out in Edinburgh’s Princes Street Gardens after an evening of entertainment provided by stars including Liam Gallagher, Rob Brydon and John Cleese.  Sleep in the Park raised £4.5m in just one night.

“We all know Edinburgh is a wonderful city with an ambition to eradicate homelessness in the city and throughout Scotland. The Social Bite Village has mobilised a huge number of individuals and companies who wish to contribute positively and proactively to a very worthwhile objective. Anyone associated with the Scottish construction industry should be proud to support the efforts of many dedicated organisations by providing a few building materials.  Norbord certainly is and looks forward to future Social Bite initiatives.”

For further information on Norbord, please call 01786 812 921 or visit www.norbord.co.uk or www.sterlingosb.com 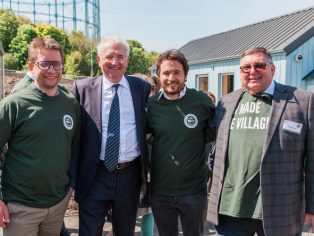