It’s been almost two years since the Government chose to abandon dedicated requirements for SuDS on new developments using the 2010 Flood and Water Management Act. Instead, the National Planning Policy Framework (NPPF) requires sustainable drainage on new developments of 10 or more dwellings in England, and SuDS are also demanded elsewhere in the UK. In addition, existing NPPF prioritisation of SuDS in areas of flood risk, and requirements that developments should not make flood risk worse elsewhere (effectively by utilising SuDS), still apply to developments of any scale.

The onus for implementation has now moved to local planning authorities (LPAs), through local policies and planning application decisions. New guidelines and policies are gradually appearing, spelling out what LPAs expect from housebuilders and resisting cost arguments against SuDS. There is plenty of evidence to demonstrate that well-designed SuDS cost no more to install or maintain than conventional piped drainage, particularly when considered as multifunctional elements within the overall project design.

By its very nature, concrete block permeable paving is uniquely placed as an essential, multifunctional SuDS technique. Of course, hard surfaces are necessary for housing anyway – whether for roads, parking, shared spaces or play. But permeable paving also provides an inherent drainage system that requires no additional land take for water storage, treatment or conveyance. It also addresses both flooding and pollution issues by storing and cleaning water runoff at source. This technology eliminates pipework, gulleys and manholes, and should therefore cost less than conventional drainage and paving.

In fact, concrete block permeable paving can also accept runoff from other impermeable paving and roofs, giving further savings. It can simply infiltrate rainwater falling on it straight into permeable ground, after removing pollutants. But, as is more commonly seen in the UK, less permeable conditions such as clay will limit infiltration and on brownfield sites existing pollutants may preclude infiltration. Here, permeable paving is used to collect and store water onsite during storms, before gradual discharge to surface water or combined sewers, or watercourses later, avoiding surcharging and flooding.

Riverside Court in Stamford, Lincolnshire, is a high-density (106 units/hectare) towncentre housing scheme, with SuDS designed by Robert Bray Associates. In the development, most public areas between the buildings are concrete block permeable paving, which also accept runoff from other hard areas and roofs. In addition to infiltration to the ground, stored and cleaned water also passes from the paving directly into planted rills and canals, enhancing the courtyard environment. From here, any remaining water can eventually flow out into the adjacent River Welland. This SuDS scheme is made up almost entirely of concrete block permeable paving and eliminates any sewer connections.

Where a comprehensive SuDS scheme is planned to incorporate landscape features, concrete block permeable paving removes water-borne pollution and provides a gradual flow of clean water at the head of the ‘management train’. Surface water in open SuDS features can then be used to enhance landscape design and biodiversity.

Following some 25 years of use in the UK and abroad, concrete block permeable paving has proved to be a predictable, reliable and low-cost SuDS technique. Its capability to attenuate water flow during rainfall for gradual discharge is well known. But, this principle is optimised for greater cost efficiency by considering distinct storage ‘compartments’ of permeable paving using straightforward flow control devices with an orifice (accessible for observation and adjustment if needed) on the outlet.

This technique enables water storage to be strategically deployed around a development within permeable paving compartments, each with a flow control demonstrating compliance to local authorities as part of the SuDS design approval process. It maximises the potential for water to be stored onsite, beneath paving that is needed anyway. This avoids dedicated water storage structures on valuable land, as well as their associated excavation and construction costs.

Similar techniques maximise storage in permeable paving on sloping sites, using terraces of compartments separated by simple check dams that incorporate flow controls. Flow controls can also be used to retain water and make the most of available infiltration, in turn reducing discharge.

A recent example of SuDS applied to a typical new housing scheme is Fleetwood Crescent – the 28-home first phase of a new development in Peterborough. It makes extensive use of concrete block permeable paving, reflecting Peterborough City Council’s desire to incorporate SuDS in its developments. The permeable estate road will be adopted under the ‘Section 38’ process and is a trial project, with its performance being monitored.

The drainage is designed to temporarily store rainwater runoff onsite and remove pollutants before gradually discharging to an existing surface water sewer that outfalls into a nearby watercourse. Water discharge from the development via the permeable paving is restricted to ‘greenfield’ runoff rates by an orifice flow control chamber. Surface water storage volumes on the site are designed to cater for rainfall events exceeding the one in 100 year storm plus 30 per cent allowance for climate change.

Un-adopted driveways next to dwellings and shared parking areas are also concrete block permeable paving, linked to the permeable road construction with pipes below the footpath. Rainwater from all roofs drains into the driveway permeable paving. Services are generally accommodated in ‘corridors’ within the footpaths, with an impermeable block paved road crossing.

Of course, paved surfaces help to define the character of any development. The growing choice of concrete block permeable paving products available, with numerous shapes, styles, finishes and colours, allows for freedom of design. At the same time, permeable paving can provide a completely level, well-drained, firm and slip-resistant surface accessible to all, without the need for cross-falls, channels, gulleys or other interruptions. Rainwater ‘ponding’ is eliminated, reducing the risk of ice forming on the surface and preventing splashing from standing water. 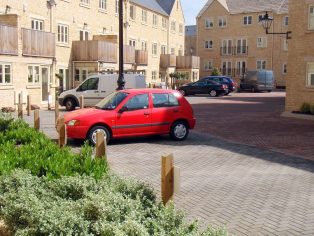