Although burning wood is often hailed as being a sustainable source of energy, the Government report, ‘Life Cycle Impacts of Biomass Electricity in 2020’, confirmed the potential for a negative environmental impact. This is not a new development; many in the wood panel industry, not to mention scientists and environmentalists from around the world, have been highlighting the issue for years. As far back as 2010, the Wood Panel Industries Federation submitted a report to the then responsible government department, DECC, which stated that  if the UK biomass industry were to displace the UK wood panel industry as primary consumers of four million tonnes of UK sourced timber, the net CO2 emissions for the UK would rise by 6 million tonnes – more than 1% of the UK’s reported emissions in 2008.

The use of biomass by the energy sector is growing with major power generators like Drax converting former coal-fired boilers to burn wood as a ‘sustainable’ alternative to fossil fuels. The reality is stark. Burning one tonne of dry wood in a power station releases 1.8 tonnes of CO2 into the atmosphere while subsidising the burning of forest wood by the energy companies costs £100 a year in the average household’s energy bill.

The attached EU commission report (http://ec.europa.eu/DocsRoom/documents/18081/attachments/1/translations/en/renditions/pdf) published this year considers amongst other things the impact resulting from changing wood flows (section 9.3). What it shows is that, if European wood reserves were mobilised for material uses, the total CO2 effect out of the material value chain is 2.6 times higher than the reference scenario and 0.6% higher than for energy uses. There are particularly significant benefits for employment if material use is prioritised over energy. When comparing the whole processing value chain, the employment ratio is 4.2 times higher for material utilisation than for energy utilisation.

Norbord is raising the issues surrounding the misuse of wood and the message that prioritising reuse and recycling ahead of burning for energy delivers clear and tangible benefits in respect of resource efficiency, carbon storage and employment.

For further information on Norbord, please call 01786 812 921 or visit www.usewoodwisely.co.uk or www.norbord.co.uk. 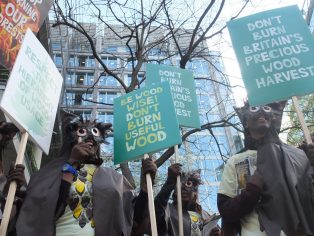