The making of Abbotswood Park

Marley Eternit’s Edgemere slates have been used to help create a distinctive village identity for a mixed use development adjacent to the Warner Bros studio in Leavesden, home to the ‘Making of Harry Potter’ tour.

A significant proportion of the 425 family and affordable homes at Abbotswood Park have been built by Bellway Homes, using both old English Dark Red and Smooth Grey Edgemere slates, to create a mixture of roof heights and designs, adding rhythm and interest to the streetscape.

Formerly the Leavesden aerodrome, the historical site was built during World War II for the production of aircraft before being sold to Rolls Royce and then transformed into a film set in 1995 to shoot the James Bond film Golden Eye.

Situated next door to Warner Bros studios, Bellway Homes bought the site for a mixed use development including 425 properties, commercial and amenity space. Steeped in historical, industrial and film making history, there were strict design parameters agreed with the local planning authority to ensure the site would be developed to create a clear sense of identity and mixture of homes.

The different roof forms, heights and designs were a key part of creating this identity and Bellway Homes chose Marley Eternit’s Edgemere slates to give a contemporary, yet cost effective, roof covering that could be used to add character to different parts of the development.

“Edgemere was the ideal choice for the roofs in the development, with its thin leading edge, giving the appearance of natural slate at a more cost effective price. We received excellent technical support from Marley Eternit and we’re really pleased with the end result.”

“The combination of the two Edgemere colours on different properties is very effective, not only to create a sense of individuality for each property but also to add character and identity to different parts of the development. These thin leading edge concrete slates give a premium appearance at a much lower price and because they are an interlocking tile, are very quick to install, which is particularly important on a large development like this one with many roofs to be fixed.”

Marley Eternit’s Edgemere slates are large format concrete interlocking tiles with a thin leading edge for a slate like appearance at a more attractive price. With only 9.7 tiles per square metre, Edgemere is a single lap solution that is quicker and easier to install than natural slate and 40% thinner than standard concrete interlocking tiles. With the ability to perform at pitches as low as 17.5°, Edgemere has the versatility to be used on a wide range of roof types and is now available in three variants, standard, riven and duo.

Edgemere slates also offer impressive environmental credentials. Independent carbon certification, the ability to achieve an A+ rating in the BRE’s Green Guide to Specification and certification to the BES 6001 standard for Responsible Sourcing, means they can help to achieve extra material credits under one of the current UK environmental assessment methods.

For further information on our range of products and services just ask ME at www.marleyeternit.co.uk or call ME on 01283 722588. You can also follow ME on Twitter @MarleyEternit. If it matters to you it matters to us, that’s why with ME it’s all about you. 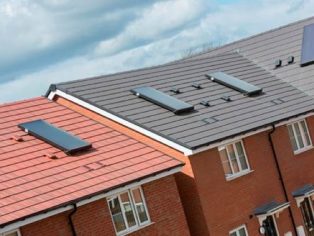