As the days get shorter and the nights grow colder, Altecnic the UK’s leading supplier and manufacturer of accredited plumbing equipment is encouraging plumbers to promote the benefits of thermostatic radiator valves (TRVs).

As well as the well-known economic and efficiency savings, Altecnic is raising awareness of the safety benefits of installing its A rated Ecocal TRV.

Designed and developed to meet the highest international accreditation standards, Altecnic’s Ecocal is the ideal TRV for both domestic and public environments including schools, car homes and university accommodation. It’s ‘anti-tamper’ function allows the head of the Ecocal to be set to a single non-adjustable position, providing a safe and constant output temperature which eliminates the risk of accidental scalding particularly amongst vulnerable people such as children and the elderly.

“Most people are now aware of the economic benefits of installing thermostatic radiator valves; however there is also an important safety issue that is often overlooked. The dangers of hot tap water are widely known and thankfully thermostatic mixing valves are now common place, however an average domestic boiler operates between 72 and 82 degrees and this can lead to an uncontrolled radiator being a serious scalding risk. The Ecocal’s anti-tamper function allows users to set radiators to a permanent safe and comfortable temperature which is essential in public places that attract a wide range of visitors.”

As well as offering an easy to set anti-tamper safety mechanism, Ecocal is one of the most energy efficiency TRVs available on the market. Having achieved an ‘A’ efficiency rating under the European Valve Manufacturers’ Association, ‘Thermostatic Efficiency Label’, the liquid filled Ecocal has an ‘economy’ setting which allows it to be set at a safe and comfortable level and instantly reacts to changes to ambient temperature.

Manufactured and designed for both retro-fit and new installations, Ecocal is available as 8mm, 10mm and 15mm and is designed with a serrated sliding tail piece to prevent alterations to pipework during installation. The Ecocal also has a fully reversible body for either a vertical or horizontal fit and is suitable for on flow or return pipework providing installers with ultimate flexibility and its positive off position allows the radiator to be removed without the need to be drained. 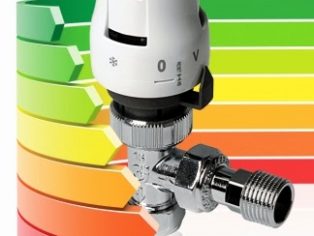