Top marks for project to give old school new life

In many ways the Baylis Old School development is a class apart. The bare facts are it’s 149 new homes – 60 of which are badly needed affordable units – in the London borough of Lambeth. But you would be ignoring the real story and, well, let’s just say it would be a ‘must try harder’ verdict in your school report.

That’s because the challenge for this housing project is that it’s set in and around the Grade II Listed former Lilian Baylis secondary school. Designed for 600 pupils in an instantly recognisable 1960s modernist style by Architects Co-Partnership (ACP), its detractors would certainly agree to label it as that style of design that has been dubbed brutalism architecture. Some are still asking why the site wasn’t razed to the ground when the children moved to a new school in 2005.

But since then, a community sports initiative has been set up for just under half of the old school grounds with Henley Homes buying the rest. After agreement from Lambeth Borough Council that some school structures could be demolished, planning permission was granted last year. With the close involvement of English Heritage, buildings on the western side of the site – listed as important examples of an early block-planned school – have been retained and original features restored.

Designed to the planning stage by Conran and Partners, the approximately £60 million project on 3.2 acres will eventually produce one-, two-, three- and four-bedroom homes that are a mix of refurbishment and conversion of the ’60s buildings, which are a concrete frame with brick facade, plus new steel-framed apartments and townhouses.

“The layout and function of the old buildings were aimed at the philosophy of schooling in the ’60s. The challenge was to understand the architectural language, proportions and how that might work in a residential form.

“So it’s certainly about using all of the former courtyard forms, for instance, in an enjoyable residential way. And it’s making the best of the generous floor-to-ceiling windows – providing in many instances the equivalent to loft-style living – placing the right rooms behind that amount of glazing, and then using the architectural style and rhythm and enhancing it in a delicate way.

“ACP had such a clear vision for the school that, love it or hate it, it has been very easy to translate into a modern residential development.”

He believes the most noteworthy engineering features are the original and huge concrete floor slabs, visible externally, which were precast on-site. This was a signature style of ACP and a deliberate move away from the traditional Victorian school of architecture. Alongside this are the very large expanses of glazing, quite unusual at the time in municipal buildings.

“Some buildings have floors that step in and out, others are on piers at ground level, allowing circulation beneath them to playgrounds and a good viewpoint for staff to keep an eye on what was happening.” Incorporating these features has given rise to “a scheme where open, airy classrooms overlooking spacious playgrounds have become large apartments with original but refurbished and code-compliant sliding fenestration overlooking landscaped courtyards”.

Flat roofs (definitely out of bounds to pupils at the former school!) have become glass-balustraded balconies or terrace gardens. And Shakil adds that floor-to-ceiling ribbon windows along corridors have created “striking communal areas or been brought within apartments to provide dramatic views and amazing amounts of light”.

Lee is certainly a fan of the old school design. He says:

“It’s quite sculptural, I particularly like the expression of the structure and the concrete slabs and how those are used as forms almost like a set of drawers that the building form pushes and pulls.”

He explains that besides converting former classrooms there were decisions about what to do with circulation spaces, a “generous openness” around the edge of the site and the intimate set of courtyards inside. He says:

“The scheme is about the spaces it creates, which is equally as important as the way it looks and was formed.”

“There are four internal courtyards and we’ve used the intended circulation routes through the centre of the site so, generally, the apartments have dual aspects and relationships and they all evolve and rotate around pinwheel courtyards and then face outwards from the court.”

Lee says the apartments in the refurbished school buildings are generous in size and space because the widths of rooms need to relate to the high ceilings. Typically, a number of rooms were brought together to form each apartment, often with associated rooms adjacent to the classrooms and some corridors becoming bedrooms, while classrooms themselves became the main living/dining spaces.

“This school did not conform to the older traditional classic school design of a quadrangle and then classes running around that. It’s more complicated than that – more of a pinwheel of rotating courtyards, then there are cloisters and overhangs and a series of spaces that reveal themselves as you walk through deeper into the site,” reveals Lee.

Lee admits that working with existing buildings is always a challenge.

“We worked with structural engineers to understand where we could drop new service runs. There are all the sorts of things that come with housing – where do you put the toilets successfully, where do you drain the sinks from and ventilation.”

He believes the innovation – and the sustainability – on the project centres on reusing the buildings, rather than knocking them down, and working with the existing fabric. “Take the thermal performance of the existing building – as a school you were just trying to heat classes for very active children but that doesn’t meet the housing standards of today.

“We’ve had to introduce insulation without affecting the external appearance or internal feel – a gentle approach to sustainability with photovoltaics and efficient boilers to improve thermal performance and insulation treatments applied to floors, ceilings and walls, plus stepping profiles next to windows.”

Aaron Usmani, Henley Homes contracts manager, points out that timber from demolished parts of the school are being reused in the retained areas. And precision blasting was used to remove 50 years of paint to help in the process of upgrading original wooden window frames to a modern double glazing standard – “…a laborious task but we made that decision to retain the aesthetics of the building,” he says.

He agrees with Lee on the difficulties of installing new infrastructure for services:

“We’re having to dig up the concrete floors and it’s complicated because there are a dozen or so separate buildings on this development as a whole so it’s a challenge to coordinate a new drainage system, water, gas, electricity.”

Half the development site is new-build structures of varying different shapes and sizes, rising to a maximum height of six storeys – but all are designed to blend in with the old school buildings. Aaron explains a panelised system of brick slips is being applied to the steel frame of many so they have a look compatible with the older structures.

And inside, again to pick up a theme from the old school, there are generous ceiling heights. Lee says:

“We didn’t want to duplicate exactly, it was more a case of light references to the old but very much buildings of their time. So, it was about using similar materials, most notably complementary brick in terms of pallet and tone. But it was always important to our architectural strategy that there was a clear legibility of existing and new.”

First occupation of the refurbished school buildings should be in August this year with people moving into the new-build homes from six months after that. There are 24 shared-ownership units and 36 units for affordable rent. Eligibility criteria, including maximum income levels, will apply for people hoping to take up the shared ownership homes and priority will be given to people living and working in Lambeth. The Guinness Trust will work with Lambeth Borough Council to allocate the affordable rent units – but tenants will most likely be from within the borough as well.

Challenges remain, like exactly what’s to be done with the school’s assembly hall, which planning consent stipulates must be kept as a public building. But, overall, Lee believes the design aims for the Baylis Old School have been met:

“It was a building that clearly Lambeth wanted to save. The key was coming up with a solution that would allow new life. I feel we’ve retained the charm of the school and we’re using its form and shape for a new future.” 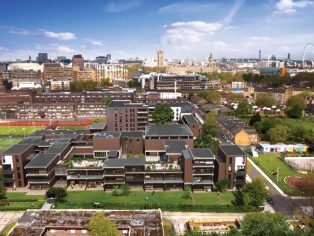 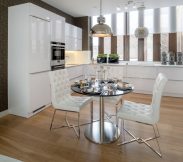 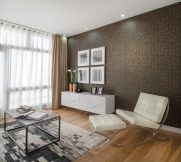