Turn down the heat on energy bills

Energy costs are once again the topic of discussion this winter as developers continue to look at new ways to reduce energy consumption, resulting in lower bills for their buyers. But, rather than resorting to costly additions to housing specifications or installing expensive alternative energy sources, recent research has proven that there are simple, off the shelf, cost-effective solutions available that could reduce the energy consumption of a domestic heating systems by up to 40 per cent. They not only save money, provide increased comfort and are easy to install, but also offer reliability and long-lasting results where maintenance costs are a concern.

According to research by TACMA, the controls association within the British Electrotechnical and Allied Manufacturers’ Association (BEAMA) and the Energy Saving Trust, 70 per cent of UK homes do not have the minimum level of controls (programmer, room thermostat and TRVs) installed to their heating systems. Yet, a recent study by the University of Salford has shown that effective temperature controls combining a room thermostat and TRV on home heating systems have a far more significant effect on minimising energy usage than previously thought – and that ultimately means considerable cash savings for homeowners.

TACMA commissioned the University of Salford to carry out independent tests on the performance of heating controls in their Energy House facility. The facility consists of an environmental chamber, designed to assess the effectiveness of new and existing technologies in reducing energy use and waste.

The tests showed how the application of TRVs that provided independent temperature control in every room can significantly improve comfort for householders by providing satisfactory heat distribution around the dwelling. The results showed this is not achieved without TRVs even if the system was balanced.

TRVs are an extremely efficient way of controlling radiator areas with an independent valve shut down as the room reaches the set temperature. They are a hugely beneficial component to domestic and multi-occupancy heating systems and will help to cut costs and be more energy efficient. They also achieve compliance with Building Regulations Part L.

TRVs boast many advantages to properties for both homeowners and building managers. This proven technology not only offers energy savings but also regulatory compliance, reliable performance, and is quick and easy to install to new or existing radiators, especially when the system is drained down. And, as TRVs are designed for ease of servicing, the downtime of the system is minimised, reducing any inconvenience to tenants and being cost effective in terms of labour and maintenance.

TRVs also differ from other means of reducing energy costs, such as larger renewable investments, in that the disruption caused is minimal, the initial cost outlay is small and ongoing maintenance is negligible, delivering measurable benefits to all those involved with the property.

In fact, the evidence provided by the tests carried out by the University of Salford suggests that a homeowner could save up to £409 over a year, if a room thermostat combined with TRVs are installed.

Manufacturers are also tuning into the visual impact of TRVs and how this can influence purchase decisions. As radiators become something of a feature in properties rather than just a necessity, and finishes change from the basic white gloss to chrome, anthracite or even matt black, it is essential to keep homeowners tuned into the energy benefits of TRVs. If the look of the radiator is compromised, its efficiency could be too when a corresponding manual valve is chosen over a standard white TRV. Enter decor valves – relatively new to the UK market they provide all the benefits of TRVs with the added advantage of blending with a radiator finish.

The next generation TRVs are now widely available and tap into the digital era. Programmable Radiator Controls provide even greater efficiency – up to a further 30 per cent in some cases. The PRC is an intelligent product that can be set to ensure the individual radiator can come on or off at different times depending on the residents’ requirements. For example, a typical family will heat their whole house, but may only require the heating on in a morning within the bedrooms, bathroom and kitchen. The heat emitting from the radiators in the other rooms in the house is then wasted. The PRC will allow for each individual radiator to be set at a specific temperature and time, so the radiators in the rooms that aren’t in use at that time can be programmed off, even though the heating is on – keeping in tune with the residents’ routine and providing a greater saving on energy usage and cost.

No matter which generation you opt for, when it comes to choosing a radiator valve the key has to reliability and confidence in the brand chosen.

Selecting a reliable product with a good reputation will ensure the efficiency of the system and provide real savings. Kitemark approval from the EN215 Standard is a good assurance of quality and performance, as is the ‘A rating’ provided by the TELL scheme, which gives a European wide seal of approval.

British engineered TRVs are also a wise choice, especially when produced by UK manufacturers, as they will not only deliver on quality and performance but also ensure total compatibility with radiator systems in this country.

Ultimately, TRVs and PRCs are tried and tested products that provide huge benefits for both domestic and commercial heating systems. The proven technology delivers a product that offers a simple addition to new or existing radiators and is relatively straightforward to install. The benefits to be gained are huge and validated by the University of Salford’s research, which conclusively proves that better control systems will deliver comfort and lower energy bills. 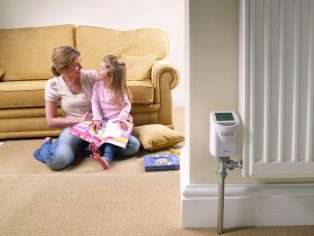