Berkeley Homes Southern has been shortlisted for the Planning Awards for two of its flagship developments, both close to Horsham, West Sussex. The leading housebuilder was nominated in the categories of Best Housing Scheme for Highwood, Horsham and Best Use of Arts, Culture or Sport in Placemaking for Broadacres, Southwater.

Run by Planning and Placemaking Resource, the awards recognise excellence in professional planning and placemaking. The winners will be announced at the awards ceremony due to take place at on 24 September in London.

Harry Lewis, Managing Director of Berkeley Homes Southern commented: “We are delighted that two of our landmark developments, Broadacres and Highwood, have been shortlisted for the Planning Awards. Berkeley prides itself on creating sustainable and welcoming places where people enjoy a great quality of life. Both Highwood and Broadacres are not only successfully delivering important housing, but also valuable public amenities and green space to knit communities together, both new and old. We have worked closely with Horsham District Council and other stakeholders to ensure that both of these schemes represent the very best of placemaking and we are proud that this has been recognised.”

Claire Vickers, Cabinet Member for Planning & Development at Horsham District Council commented: “I am really pleased that both Highwood and Broadacres have been shortlisted for such prestigious national awards for excellence in planning. Both developments have been planned for a number of years and are of very high quality, bringing a number of benefits to the community. They demonstrate the advantages that can be achieved through positive collaboration between the Council, the public and developers. I wish everyone the best of luck at the finals.”

Highwood forms a natural extension to Horsham, providing over 1,000 new homes set in 13 acres of parkland. Its wide range of recreational and community benefits include a community centre, allotments, sports pitches and play areas, along with improvements to the highways network with a new road bridge over the A24. Housing in a range of tenures including private sale, shared ownership, affordable rent and apartments for over-55s has attracted a variety of residents forming a vibrant and sustainable new neighbourhood.

For further information about Highwood and Broadacres visit: https://www.berkeleygroup.co.uk/ 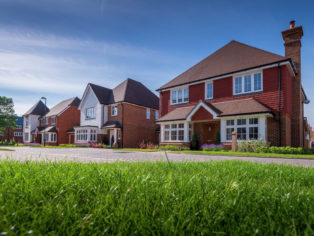