The first construction PMI compiled entirely after the EU referendum result has signalled a further downturn in UK construction output.

It is led by the steepest fall in commercial building in seven years, alongside a drop in civil engineering activity and residential construction.

The uncertainty has also dampened client confidence, led to greater risk aversion and the adoption of a wait-and-see approach to decision making.

“The figures confirm a clear loss of momentum since the second quarter of 2016, led by a steep and accelerated decline in commercial building. However, it’s not all bad news, at least insofar as the decline in construction output was little-changed from June’s seven-year low.”

For a second month running ,the Markit/CIPS UK Construction Purchasing Managers’ Index® PMI dropped, from 46.0 in June to 45.9 in July (readings below 50.0 show a deterioration).

Weaker order books continued to act as a brake on business activity resulting in an overall reduction in new work for a third consecutive month.

Insufficient new work to replace completed projects resulted to a fall in employment numbers for the first time since May 2013 and a weaker demand for sub-contractors.

Meanwhile the weakened sterling increased materials costs at the steepest rate since March 2015 despite lower demand for inputs.

The survey also signalled a fall in confidence regarding the year-ahead business outlook, which hit the lowest rate since April 2013 but remained above the record lows experienced during the 2008/09 financial crisis.

“Though a marginal drop in the index compared to last month, the sector’s downhill course is a seriously disappointing development, with purchasing activity falling for the second consecutive month, and following another drop in new orders.

“With a reduction in new work for the third month in succession and one of the fastest falls since early 2013, this hesitancy to commit was largely attributed to the continued hazy gloom of uncertainty as clients became more cautious, and deferred orders. The picture is still unclear around whether this direction is fixed for the coming months or is a short-term reaction and the aftershock of the UK’s referendum decision.” 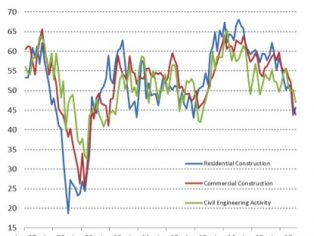