A new poll has revealed Britons’ power predictions for the homes of the future, with domestic wind turbines installed in every garden, water turbines harvesting the energy generated with every flush of the loo and electronic devices driven by exercise equipment voted among the top futuristic sources of energy in the home.

New research has revealed the Britain of the future, where wind turbines are a garden essential for every UK homeowner and the only way to watch the TV is if a member of the household is prepared to get their heart rate up. Further power predictions include water turbines stationed in gutter pipes, and bathroom drains; as well as floorboards that harvest energy as you walk across them, and all traditional roof tiles featuring integrated solar technology.

The poll was conducted by the team behind Gocompare.com Energy in order to investigate what predictions the public hold for the future of their homes. 2,876 British homeowners took part in the study, all of whom were 18 years old or over.

Firstly, all respondents were asked if they thought that there would be changes in the way homes are powered in the future, to which the vast majority (91%) stated that they thought there would. Of these, 84% believed power would come from ‘more sustainable sources’, with a further 61% believing that UK homes will become more ‘self-sufficient/independent’. Further to these results, 9% of those polled believed that homes will not be powered by any mains gas or electricity at all in the future.

Following this, all respondents were provided with a list of predictions and asked to identify all those they expected to happen in the future. The results revealed the following top six predictions for the energy in UK homes of the future:

Ben Wilson, an energy expert at Gocompare.com, made the following comments about the results of the study:

“It’s been fascinating to see what energy innovations people think we could see in our homes in the future. It’s no wonder that we are starting to see more people considering the sustainability of our power sources – but that’s not to say that washing machines are going to be outlawed any time soon! If anything, they will just become more energy efficient.”

“What’s particularly interesting is that some of these predictions aren’t necessarily that far-fetched. I could well envisage a workout station where you can charge your mobile phone while you work up a sweat, or the advance of solar technology to make it all a little more aesthetically pleasing for UK rooftops. The industry is fast paced and alternative and renewable energy providers are constantly looking for new ways to generate power, so I could see some of these coming to British homes very soon.” 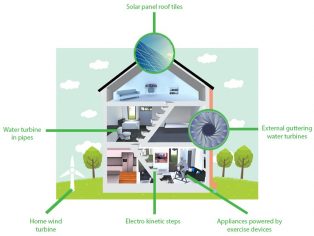