UK house prices to rise by three per cent in 2018, as first time buyers projected to account for largest share of housing sales for over a decade

A year ago Hometrack was at the optimistic end of forecasts for house prices in 2017 projecting an increase of four per cent on the basis of a continued pick-up in regional housing markets offsetting weak price growth in London.  Twelve months on the property analytics business expects 2018 to follow a similar pattern with the UK’s top 20 cities forecast to register house price growth of five per cent next year. For the UK as a whole Hometrack predicts house prices will increase by three per cent.

Looking at the outlook for next year in more detail, Richard Donnell, Insight Director at Hometrack outlines his three defining themes for the UK housing market in 2018:

“Housing sales have been stuck at 1.2m for the last three years and we don’t expect this to change over 2018.  Sales volumes have been falling in south eastern England and are down 16 per cent in London since 2014. However, first time buyer purchases have been taking a growing share of sales. We expect first time buyers to be the largest group of buyers in 2018 accounting for over one in every three sales (35 per cent) and overtaking existing home owners (34 per cent) – see figure 1. Investors buying with a mortgage will see a further fall in sales to six per cent due to tax changes and low yields impacting buying power in southern England. We expect first time buyer numbers to continue to grow in regional housing markets where affordability is more attractive. First time buyer numbers have fallen by 10 per cent in London over the last three years as affordability pressures limit access to the market.”

“We are currently ‘half way’ through the current housing cycle that started in central London and is now spreading further afield as the economy grows and mortgage rates remain low. London house prices are up 70 per cent since 2009 but affordability levels are stretched to an all-time high (14x earnings) with sales volumes down and house price growth (+2.9 per cent) failing to keep pace with inflation. ”

“In contrast, regional housing markets and cities outside the south east have further potential for material growth in house prices as affordability remains attractive. Large regional cities could register house price rises of up to 25 per cent over the next two-three years. The likes of Manchester, Birmingham and Glasgow have seen market activity increase and this has delivered above average price growth of six-eight per cent for the last 12 months. London is facing a drawn-out period where house prices and earnings need to re-align – we expect the rate of house price inflation to remain in low single digits over the course of 2018 with prices falling in real terms.”

“Rental values have been growing at an average of three per cent per annum over the last three years, broadly tracking the growth in average earnings. Rental growth has slowed in 2017 to 1.6 per cent across England and Wales with static rents in London and the South East acting as a drag on the headline rate of growth. A lack of rental growth in London is down to lower levels of in-migration and stretched affordability levels given that average rents in London are 47 per cent higher than a decade ago. Tax changes have led to much slower levels of new investment in rented homes which is tightening supply and supporting rents. Rental growth is stronger in regions outside southern England where rents are far more affordable relative to earnings. Overall, we expect average rents to rise by two per cent over 2018 with above average growth in regional markets.” 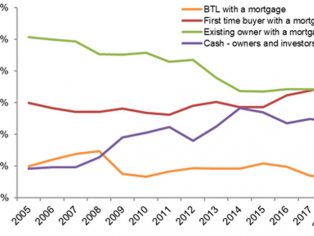