Under 10’s score support from Redrow

Cleethorpes Town under 10’s are hoping to keep their run of success protected after housebuilder Redrow helped them out with a new shelter.

The team needed an events shelter to take with them to various tournaments but were short of funds so approached Redrow to see if they might be able to help.

Father of one of the players, and owner of a Redrow home at Kirk’s Paddock in Grimsby, Spencer Beal said:

“The Under 10’s team have been playing a year above their age group this season in the lower league of the Under 11’s and they finished the season as joint winners.”

“They’ve done really well – they played in two cups last season, which included teams from both under 11s’ leagues. They won the supplementary cup at the end of the season, again a massive achievement. The team has so far won the three tournaments we’ve taken the shelter to, so it’s brought us some luck.”

“Because they’re going to more tournaments the events shelter will be incredibly useful as somewhere they can be protected from the sun and the rain between games. It’s even big enough to have a bit of a kick about in!”

“We’re incredibly grateful to Redrow for their support and we hope it helps the team go on to win even more games.”

“Redrow strives to get involved with the communities in which we build so we were only too happy to help with the team’s shelter. We hope it brings them plenty of luck next season.”

For those who’d like to kick off a move to a brand new Redrow home, there is currently a variety of four-bedroom detached homes available at Kirk’s Paddock with prices starting from £178,950.

Externally, new Redrow homes give a nod to the past with many period-style architectural features. Internally they are completely on the ball, with bright, modern features designed for ease of living. There are stylish, fully equipped open plan kitchens and dining rooms, en-suite bathrooms and utility rooms, which keep the noisy washing machine out of the kitchen.

“Compared to many new homes they’re in a league of their own.” 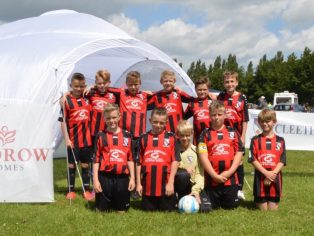