A leading regeneration specialist has hired a new Finance Director as it gears up to launch additional sites across Scotland.

Urban Union – which currently operates in Glasgow, Edinburgh and Perth – has appointed Kenny Downs to the role.

He joins Urban Union in their Glasgow head office having previously worked as Regional Financial Controller for Keepmoat Regeneration. A graduate of Strathclyde Business School, he has eight years’ experience in construction and property services and is a qualified accountant.

“This is an exciting time for Urban Union – our three current sites are doing exceptionally well, and we are preparing to start work on a fourth site in Glasgow’s Pollokshaws area.

“It is essential that we have a robust finance operation and Kenny has an abundance of experience, not only in regeneration but in the wider construction area. He’s proving a vital asset already and a fantastic addition to the growing team at Urban Union.”

The appointment of a new Finance Director marks the eighth new hire for Urban Union since the start of 2017. Other new roles include three sales advisors, an assistant quantity surveyor, a customer service manager, a sales and marketing assistant and an additional business development manager.

These new roles will allow Urban Union – a partnership between Robertson Group and McTaggart Construction – to strengthen its offering to customers in all areas.

“Urban Union has a strong reputation within the industry for delivering successful regeneration projects so to join as finance director is a real honour.

“I’m looking forward to working closely with Neil and the wider team, using my operational finance skills to ensure an even more successful future for the business and its partners across Scotland.”

Urban Union’s second project, launched in partnership with City of Edinburgh Council’s 21st Century Homes housing division, is in Pennywell, North Edinburgh. To date 193 homes have been created, of which 108 were for social and mid-market rent and 85 were for private sale. A further 177 homes are currently under construction on Phase 2 of the development with 30 properties already handed over and occupied.

The partnership is also working on a third development in the Muirton area of Perth, building 203 homes as part of the final phase of a regeneration project in conjunction with Caledonia Housing Association and Fairfield Housing Cooperative. 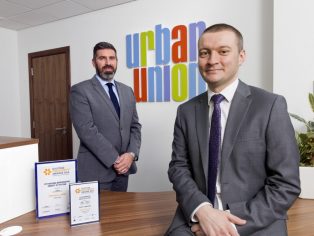