Urban Union gears up for growth across Scotland

An award-winning regeneration company is gearing up for an ambitious year with plans to build more than 250 homes across Scotland.

Urban Union – which has sites in Glasgow, Edinburgh and Perth – is committed to creating high quality accommodation, with a significant number of its stock being affordable housing.

The organisation intends to build 251 new homes across four developments, an increase of 32 per cent on the 190 it built in the 2017/18 financial year.

It follows on from a series of land acquisitions, including plans to create a brand new development in the Pollokshaws area of Glasgow. Pollokshaws Living will see the creation of 137 residential properties and will provide the area with much needed sustainable family homes.

“Urban Union has an ambitious strategy to build high quality and affordable homes in some of Scotland’s most challenging areas. We are proud to contribute to the regeneration of these communities and there is a clear appetite from local people for homes of this standard.”

“Across the past 12 months we have brought in nine additional staff members and we are confident we can deliver on the plans we have for our developments in Scotland’s urban areas.”

Earlier this year, Urban Union submitted a planning application to Glasgow City Council which outlined plans for 28 new units at Laurieston Living. That will form part of the second phase of the development, which has already proved hugely popular with buyers – a total of 32 homes have been sold since January.

In Edinburgh, Urban Union has received planning permission for the next phase of regeneration at the award-winning Pennywell Living development. The plans will see 315 new homes created, complementing the 193 homes already delivered by Urban Union. A further 177 homes are currently under construction in partnership with City of Edinburgh Council’s 21st Century Homes and due for completion shortly.

Urban Union – a partnership between Robertson Group and McTaggart Construction – is focused on delivering for the local community and has established a benefits programme in addition to an award-winning arts and living strategy. 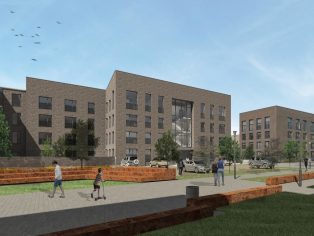 One of the homes built at Pennywell Living in Edinburgh