Urban Union gets green light for 137 new homes in Pollokshaws

The transformation of one of Glasgow’s key regeneration areas is to continue – after approval was granted for 137 new homes.

Developer Urban Union has been given the green light by Glasgow City Council to build the new homes in Pollokshaws.

The ‘Pollokshaws Living’ urban village will include 77 homes – a mix of two, three, four and five bedroom terraced properties – and 60 one and two bedroom apartments.

In addition to the sustainable housing, the application also outlines landscaping, open space, parking and associated drainage and infrastructure at the site.

Urban Union acquired the land, located between Shawholm Crescent and Shawbridge Street, in 2017. Work is due to start on the 5.74 acre site later this summer, based on a design from award-winning architects Barton Willmore.

“Our plans for Pollokshaws Living will create a number of high quality homes and apartments and we are confident the local community will be immensely proud of the new urban village.”

“Our team has significant experience in delivering award-winning regeneration projects, including at Laurieston Living in the Gorbals, and we look forward to delivering another successful long-term project for the people of Pollokshaws.”

The site, which formerly occupied high and low rise blocks, is one of eight Transformational Regeneration Areas (TRA) in the city earmarked for regeneration as part of the Transforming Communities: Glasgow (TC: G) programme, a partnership between Glasgow Housing Association (GHA), Glasgow City Council and the Scottish Government.

“It’s great to see that more high-quality new homes are coming to Pollokshaws to bring the next stage of the area’s transformation.  These new houses and flats will be great homes for a wide range of people and families, and help create the sustainable community that we want to create in Pollokshaws.”

“The new housing development at Pollokshaws has been designed by Barton Willmore’s integrated team bringing together architects, town planners and landscape architects. We have placed a strong emphasis on quality and connectivity using the local knowledge of our new Glasgow office.”

“It’s exciting to be a part of a once-in-a-lifetime opportunity to strengthen and reinvigorate this important area of Glasgow, once home to a range of low and high rise blocks. Our plans include vibrant public realm spaces and a well-considered streetscape that connects extremely well into the surrounding context, with easy access to the open countryside of Pollok Country Park.” 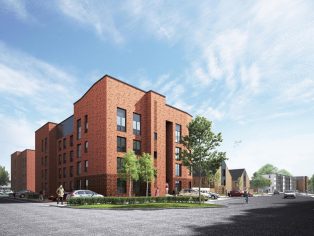