The inventor of a small and simple water-saving device looks set to tap into new markets after winning Ecobuild’s Big Innovation Pitch competition, in association with Marks & Spencer.

Nigel Bamford, who brought the Waterblade nozzle to market just four months ago following a two-year development process, was named Big Innovation Pitch winner on the final day of Ecobuild, the UK’s largest show dedicated to construction and energy, and will now be invited to further meetings with Marks and Spencer as they review the potential to trial in-store.

The Waterblade fitting turns a small trickle of water into a thin sheet of high-pressure water as wide as your hand. It operates at a flow of just 2.5 litres per minute, significantly lower than the standard tap rate of 20 litres per minute, delivering sizeable water and water heating costs. Waterblade says combined water, wastewater and associated energy savings could reach as high as £75 per tap per year.

Bamford said: “I’m absolutely delighted to have won the Ecobuild Big Innovation Pitch. The competition brought a lot of people to the stand and introduced Waterblade to a lot of people whose opinions I really value. As an inventor, the Big Innovation Pitch was fantastic to be involved in. It was such a positive experience being amongst all the other innovators who created some wonderful things.”

Waterblade was one of more than 80 entries to this year’s Big Innovation Pitch, created by Ecobuild in association with Marks and Spencer to unearth innovation across the design, construction and energy sectors. The company came through a number of judging stages to take the title. Having been included on a 15-strong shortlist, Waterblade was then one of just five companies invited to pitch to judges live at Ecobuild on Thursday, 10 March.

“We’re a young company who would like to develop Waterblade’s possibilities. I’d love to be in a positon where we’re selling Waterblade to a number of markets in different countries, making the most of its potential. “Ultimately, I’d like to be able to say, as a result of Waterblade I’ve helped people and organisations reduce their water consumption in a really positive and engaging way.”

Martin Hurn, Event Director, Ecobuild, said: “We were delighted with the quantity and quality of entrants to this year’s Big Innovation Pitch, and pleased to announce Waterblade as the worthy winner.

“The competition once again gave forward-thinking SMEs the chance to raise awareness of their solutions for increasing efficiency and sustainability and a platform to take their products to the next level, fast tracking their penetration into a wide range of markets.”

Imogen Cust, M&S Engineering Research & Development Manager added: “The Ecobuild Big Innovation Pitch is a wonderful opportunity to meet great inventors and innovators with solutions to real life energy and engineering problems – and this year was no exception. We were really impressed with the diversity and originality of the submissions to the Big Innovation Pitch, and are looking forward to working with the winner Waterblade.”

The Big Innovation Pitch was launched at Ecobuild 2015, with Endo Enterprises – inventors of an energy-saving central heating additive – triumphing over 40 other products entered. Marks and Spencer was so impressed by the product’s proven ability to save 15% on heating bills using a simple organic solution that it is now trialing it across 25 stores. 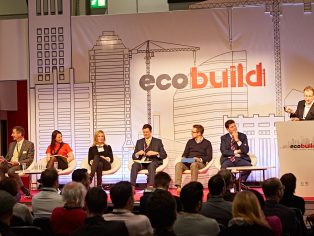