As the economy recovers and demand for new homes is rising, the ongoing brick shortage presents a challenge to a construction sector which is working hard to meet demand. Here, Alex Goodfellow, group managing director of Stewart Milne Timber Systems, comments on how timber frame is in a position to support the UK property market’s growth prospects.

Last year was a good year for UK housebuilding. The sector has experienced a fairly remarkable rise in activity in the past year. In fact, during November of 2013 it grew at its strongest pace since 2003, according to UK Construction PMI data.

Estimates from NHBC suggest that registrations of new homes were 30 per cent higher in the quarter September to November 2013, compared to a year previously. The industry body registered 34,356 new homes during this period compared to 26,420 last year. In November alone 11,409 homes were registered – 20 per cent up on the same month last year when there were 9,533.

For the housebuilding industry to grow in a sustained manner, the pace of recovery has to be maintained through 2014. Achieving this will require favourable market conditions, a regular supply of labour and a steady source of building materials.

One of these, however, is threatened by a national issue that has been ongoing since the summer of 2013. This is the current brick shortage which has been causing severe delays and rising cost implications for housebuilders, as well as impacting on build programmes.

According to figures released by the Department for Business, Innovation and Skills, brick production is around half of what it was at its height in 2000. This points to a vastly reduced supply base, brought about by the diminished housing and construction markets between 2008 and 2012, and the resulting decline in demand.

So, as developers are striving to meet consumer demand and maintain the pace of the upturn in construction activity, many are turning to other build methods which will enable them to meet targets.

A similar scenario unfolded in Texas in 1990 and, rather than delay projects, construction firms adapted to alternative building materials to speed up build programmes and realised a faster return on investment. This led to a transformation in the way buildings were constructed, as firms adopted more efficient techniques and materials.

One of these alternatives is timber frame and, as a result of the current brick shortage, timber frame enquiries have risen substantially compared to the previous quarter.

There are good reasons for developers choosing this material. Using timber frame offers important speed of build advantages that can reduce the build programme of a house to just nine weeks, with the knock-on benefits of improved cash flow and additional project cost efficiencies.

As timber systems are manufactured off-site and erected in a series of panels, they can increase speed of build significantly and homes can be delivered four to five weeks quicker than by using traditional build materials, all the while ensuring quality and energy efficiency.

It’s possible for a timber systems manufacturer to supply and erect the timber systems for its customers which helps to decrease build time, construction waste and health and safety risks on-site. Equally, thanks to these off-site manufacturing processes and prefabrication, using timber frame means build programmes remain unaffected by any forthcoming poor weather.

Likewise, its inherent energy efficiency means it is the go-to material from a sustainability perspective. With government legislation setting increasingly ambitious sustainability targets, developers will need to find housebuilding methods that meet the increasing demand for housing that can deliver energy efficiency quickly and cost effectively.

This all adds up to a readily-available, cost-effective build material that can help developers and contractors stay on track as the market improves, while increasing profitability and keeping up with the rise in demand.

We should all be pleased to hear the UK timber frame market is forecast to be the fastest growing sector of the industry over the next five years and it’s no coincidence that this coincides with improving conditions in the housing market. It can help housebuilders achieve cost-effective, flexible routes to shorter build programmes and reduced carbon outputs, while helping the industry meet demand for both housing and energy efficiency.

In that sense, it can help maintain the momentum of housebuilding and enhance the sector’s ability to meet future challenges. 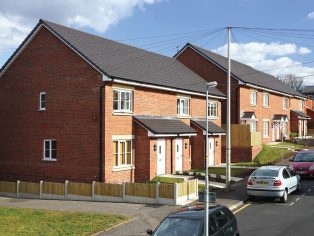 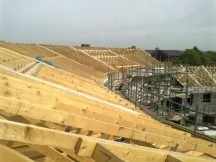