The Bodelwyddan-based contractor has been appointed to build two schools, Ysgol Gwenfro in Wrexham and Ysgol Glancegin in Bangor, as well as the new RNLI Llandudno lifeboat station.

“We’re very pleased to have won all three projects, having built up a wealth of experience in both schools and coastal construction. As with all of our projects, we’ll be using a supply chain of businesses from across North Wales, who will also benefit from the contracts.

“We’ll also be looking to provide training opportunities on all three projects, including work experience placements and apprenticeships.

“The Llandudno lifeboat station project is an extremely prestigious contract to win, with the town having had a lifeboat stationed there for more than 150 years. We’re thrilled to help the charity continue its proud tradition of operating in Llandudno with a modern, contemporary lifeboat station.

Work on the £2.6m boathouse, situated on the promenade in Craig-y-Don, will begin soon. The new station will house RNLI’s new 25-knot Shannon class all-weather lifeboat, which is due to arrive in 2017 and is too big for the charity’s existing base. It will also contain a D-class inshore lifeboat, and provide improved accommodation for the lifeboat crew.

The £5m Ysgol Glancegin project will see Wynne Construction build a new school in the Maesgeirchen area of Bangor on behalf of Gwynedd Council. Work is due to start in the summer and will be completed for the 2017 school year. The contract also includes extensive landscaping of the school grounds and a new outdoor play and educational area.

Work is already underway on the £4.9m Ysgol Gwenfro Community Primary School, developed for Wrexham County Borough Council in the Caia Park area of Wrexham. The new two-storey, seven classroom development includes a shared hall and administrative accommodation. Upon completion of the building, the existing school will be demolished to allow for new outdoor facilities and landscaping.

“As part of the project, we will open a visitor information point to allow members of the public to stay up to date on the development.

“We’ll be looking to engage with local residents on both of the schools projects as well, and are looking at different ways of delivering community benefits at both sites.” 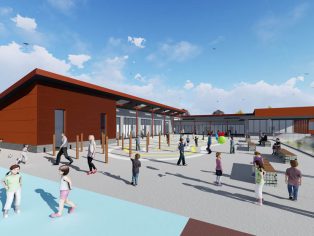