A great finish at Wembley

An award-winning new development Chesterfield House in Wembley has been completed, bringing new public realm as well as regeneration to a neglected part of the locality. Damien Sharkey, managing director of Hub Group, explains the project’s features to Jack Wooler

Bringing 239 new homes to Wembley, North London, Chesterfield House and the new public square it has been developed around are intended to form the basis for a new neighbourhood regeneration in the area.

Led by developer Hub Group and designed by architects Maccreanor Lavington, the build to rent project includes two buildings of 21 and 26 storeys, connected by a seven-storey volume.

With the site previously occupied by a “rather unloved” office building, since the project’s inception Hub has worked closely with locals to secure “the best outcome for everyone” says the developer. This means “not only providing a new asset and a new community centre for the area, but replacing the old building with something architecturally superb” that will kick-start quality housing across Wembley.”

A range of amenities to “support both physical and mental wellbeing for the inhabitants” have also been included across the one-to-three bed apartments as part of this. The variety of home types are available at a range of different rental levels and discounts.

Designed to strike a balance between creating an engaging addition to the area and ensuring both expansive views and natural light for those living in and around it, Chesterfield House is described by Damien Sharkey, managing director of Hub Group, as a “unique massing response.”

“Softened by the subtle splaying of elevations and additional terraces,” the full brick facades have been carefully designed to add “richness of texture, providing character,” and also to be “read at a range of scales, he says.

As examples, spandrels of white glazed sawtooth bricks have been used on the towers, and the ground floor elevations are finished in green glazed brick and concrete surrounds. This “materiality” alongside the form is intended to present “a confident urban image on one level, and a more gentle, engaging response more locally along the street,” explains Sharkey.

Inside, while the apartments are available unfurnished, Hub – and the building’s owners UNCLE – have worked with interior designers Design Agency to create contemporary furnishing options. With furniture from Bo Concept, everything from the sofas to the coffee tables and rugs have been “curated” so that potential residents can move straight in and be surrounded by furniture “they would actually want to own, changing the status quo of renting,” as Sharkey puts it.

Furthering this “new take” on renting, the developers have also included a number of amenities to Chesterfield House as outlined earlier. These include extensive cycle parking, a fitness studio with Technogym equipment and a TRX wall, a Zen Zone which incorporates a state-of-the-art InHere Meditation Studio, a rooftop terrace and BBQ area, and even an indoor basketball court. This is alongside “parcel holding, speedy repairs, and anything else residents need,” adds Sharkey.

The project was initially inspired by the “great efforts” underway within Brent to deliver much-needed homes in the locality, says Sharkey. The developer noticed that construction had been concentrated around the stadium, “while the old heart of town (the High Road), had become increasingly run down.”

Aiming to stem this decline, a site was identified in planning as suitable for a ‘landmark building’ in this area, and the team believed that on this particular site they had the opportunity to “catalyse regeneration” in Wembley Central.

With the concept now firmly in place, the Hub Group were intent on taking a highly collaborative approach in taking the project to the next stages. “Chesterfield House is a product of much more than Hub’s vision alone,” as Sharkey puts it. “Our partner on this project was social impact investor Bridges Fund Management, who we’ve now worked with on eight schemes around the UK.” This previous relationship gave the collaborating firms a head start on this project in terms of fostering co-operation.

Sharkey says that the “most important” stakeholders however, were the people of Wembley themselves, who the developer “worked closely with to ensure the scheme responded to their needs.”

“No-one knows an area quite as well as those who live there, so from day one we talked openly with local people to understand what they wanted out of this development – and what they didn’t want,” he says.

The community reportedly wanted the developers to re-establish the town centre’s importance, as well as providing a community centre and delivering wellplanned homes to meet a range of local needs. Public realm was also noted to be “really lacking in the heart of Wembley,” so a new square with seating, planting, and generous paved areas was envisioned.

In order to achieve this, it became clear that an “exceptionally high standard of design” was essential – and highly desired by the locals. As such, the (RIBA Stirling Prize winning) architectural practice Maccreanor Lavington were introduced into the project – designing what Sharkey describes as an “architecturally superb building that we feel represents a real step-change in quality for Wembley.”

While the team developed its plans for the site, Hub Group also provided space for local charities, community groups and start-ups within the old office building to help “breathe new life” into the High Road.

In order to ensure success, Sharkey tells me that the build process was “carefully considered” from the outset, with sustainability approached holistically throughout the development, from passive design measures to the specification of highly efficient LED light fittings and low water use sanitaryware, and the implementation of a 110kWe CHP engine for connection to a district heating network in the future.

While the process has reportedly progressed rapidly, there were of course challenges, largely presented by the site, says the developer: “Our contractor, Henry Construction, had to overcome the challenge of working on a very confined site, and right next to the railway track. We also had to find clever solutions to some technically challenging bespoke design features.”

One example of the latter is the corner junctions created by the various obtuse facades of the building, for which uniquely shaped bricks were formed by cutting and bonding standard bricks.

One of the elements that most aided these challenges, he tells me, was the use of Building Information Modelling (BIM) to digitalise the scheme, the entire project team able then to work off of one model.

As such, BIM modelling was used to closely coordinate all aspects of the design and test decisions. The project team also utilised specialised ‘real-time’ rendering software to visualise and interrogate the designs during meetings.

Sharkey says this approach was “particularly helpful” in establishing day-to-day functional solutions and ensuring that all users of the building would gain “the best possible experience.”

The model now having being fully realised in the flesh, the building is now being operated by Realstar (under its ‘UNCLE’ brand). UNCLE Wembley, as the development is now known, is already welcoming tenants.

Despite launching during the pandemic, it has proven very popular, and, according to Sharkey, it has already “revolutionised the standard of mid-market homes available” in the area, he says.

“We hope this will encourage the construction of many more good quality places to live,” he continues, noting that Hub themselves are delivering a further 256 homes currently at Wembley Link.

“Our wish is that the mixture of new public space, improved streetscape, texture-rich elevations, and high-quality homes remain a much-loved part of the neighbourhood for many years to come,” concludes the developer. 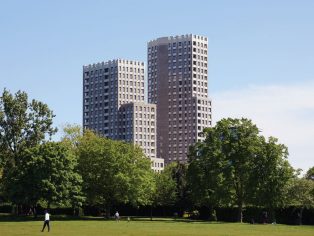