Broadoaks Park is a new high-end development that includes a restored mansion in Surrey, offering a taste of rural living within commuting distance of London and a mix of styles. Tim Banks of developer Octagon explains more to Jack Wooler

Broadoaks Park, a development including 125 luxury homes in West Byfleet, Surrey, has been labelled “unique in both scale and setting” by the project’s developer, Octagon.

The Octagon element of the multi-developer project comprises 115 new build homes and 10 restored properties within the Grade II Listed red brick Broadoaks Mansion and its out-buildings, which became a major focal point for the project and informed the design process throughout.

As well as within the 1876-built mansion, the restored and refurbished homes on the site also include lodges and a coach house.

Set in 25 acres of green space, the completed development is claimed by Octagon to offer “cohesive design in a neighbourhood that’s unrivalled due to its modern day country living and close proximity to the capital.”

The homes range from two-bedroom apartments through to six bedroom family houses, each finished to a high specification. Alongside these, the project also includes 54 affordable homes by Paragon Housing, a care home by Hamberley, and a retirement development by Pegasus Life.

The mansion was originally built in the heart of Broadoaks Park, to a design by Ernest Seth-Smith in 1876. From a distinguished line of Scottish architects responsible for building large areas of London’s Belgravia, from Eaton Square to Wilton Crescent, Seth-Smith designed the mansion and grounds at Broadoaks to be the “ultimate country retreat,” commented Octagon. The surrounding lodges and summer houses were added over the subsequent 40 years, contributing “further gravitas and character to the site.”

“We chose this site first and foremost for its location,” explains Tim Banks, Octagon’s CEO. “We already knew West Byfleet well, and our name was recognised in the area thanks to our extensive experience on the nearby St George’s Hill Estate (Cobham and Esher).”

The location’s main attraction for the developer was its close proximity to West Byfleet village centre and in particular its train station, with journeys to Waterloo taking only 30 minutes. This makes it “a fantastic location for city commuters,” says Banks.

The developer says the team saw the potential of the site “from day one,” and knew it had the range of skills required for the restoration of Grade II listed buildings, as well as the extensive landscaping around the 300-year-old oaks on the main green. The key challenge was to deliver “top specification, luxurious homes to a keen, affluent local market.”

Historically, Banks says Octagon uses “flagship” luxury properties to underpin its developments, and this project was no different. “They provide a level of financial stability to the project, and offer buyers a slightly more accessible home than the supermansions which are associated with our brand.”

He says that in general, when Octagon are offered the “right land and the right price,” they take the opportunity, and this was the case at Broadoaks Park.

The team spent years developing plans for the project to make sure they created the right product for this particular market, and Banks believes the “exceptional sales success” they’ve had so far is testament to success.

Octagon started this planning process in 2016, accompanied by extensive public consultation. In July 2018, the team was given the green light to begin construction on the development as it is now being realised.

As part of the plans, the team were required to widen the nearby Parvis Road to help with traffic flow, as well as widen and extend the existing footpath into the village centre and add a ‘Toucan’ crossing. These infrastructure improvements benefit the local community as well as Broadoaks Park residents.

When it came to the construction stage, Banks says that the existing Grade II buildings provided some of the “most challenging, yet exciting” parts of the project.

When Octagon acquired the site, he says the buildings were in a “desolate” condition, so important consideration had to be paid to how the team would restore and convert them, while of course making them commercially viable.

The coach house, for example, which is being converted into six two-bedroom apartments, had to go through a careful planning application process with input from English Heritage. Banks however reports that Octagon’s “extensive experience” in this field prevented any hiccups. The team has also converted the Grade II listed West Lodge into a new sales and marketing suite due to open this month, which will showcase the development’s heritage and character to potential buyers.

The construction process involved in the road widening, as well as the creation of a new entrance to the development, came with its own challenges due to the high traffic levels on Parvis Road and the accompanying congestion. Seeking to minimise disruption as much as possible, the developers maintained “clear communication” with the local community throughout the construction process, and now the road is reportedly far less congested.

Tackling surface water run-off was also “particularly difficult” on this site, says Banks. The developer had to install underground SuDS crates to attenuate the flow of surface water, storing it before releasing it into the existing ditch bordering the site.

Lastly, with the majority of construction work taking place in 2020, there were inherent Covid-related challenges that needed navigating, from keeping the site and staff safe, to managing delays in the supply chain.

“Thankfully, as a medium sized developer,” says Banks, “we were able to adapt quickly, and disruptions were kept to a minimum, pushing back construction on the project by only two months.”

Now completed, the homes, both inside and out, clearly reflect their luxury standing, having been carefully specified to that end as well as harnessing the mix of old and new architecture. “A trademark skill of Octagon’s is our ability to blend the new with the old, building new homes that match the location they inhabit,” says Banks.

“Nowhere has that been more important than at Broadoaks Park, where we have been inspired by the Victorian architecture of the existing buildings to create a characterful neighbourhood that feels as one.”

Pitched roofing, intricate brick detailing and large sash windows provide strong external examples of this, giving each home a neo-Victorian style, with a mix of red and yellow brick finishes.

Inside, homes are suitably contemporary, featuring spacious living spaces specified with the latest top-of-the-range appliances. High tech features come as standard, such as a boiling water taps in kitchens, remote-control operated automatic garage doors, and underfloor heating. The properties are built to be fully compatible with the latest home technology too, should buyers wish to install electric curtains or smart lighting for example.

“Many purchasers have also been keen to use our interior design service,” says Banks. This involves buyers working with the developer’s in-house team to decide on elements from window treatments through to bespoke furniture.

Just as much attention has been paid to the outdoor space, with communal parkland interspersed throughout the development, including retaining the substantial green at the entrance to the site. Alongside this, accompanying all family homes are “lavishly” planted private gardens, adding to the estate’s “quintessential country feel.”

When it came to the development’s environmental properties, all the homes have been built to Octagon’s “customary high energy standards,” including an EPC ‘B’ rating.

As part of this, each property has been fitted with whole-house ventilation with heat recovery systems, helping to reduce energy loss. EV charging points have also been situated across the development for electric cars, fitted with three-phase electric current to support faster chargers.

Octagon carried out a number of ecological surveys with a specialist consultancy in order to evaluate the pre-existing wildlife on the development, to protect them throughout construction and re-introduce them once the development was complete.

The surveys informed the team of the presence of reptiles and bats on the site, and as such the developer was required to obtain a bat license. This informed the demolition process to ensure the team did not demolish buildings during the bats’ hibernation season.

Octagon also erected temporary bat boxes around the site to create alternative safe roosting sites. Similarly, all reptiles were removed from site prior to construction and the developer built a protective barrier around the perimeter of the site to ensure they were not put in danger.

“We are re-introducing this wildlife back to the site through our landscaping and installation of permanent bat boxes,” Banks adds, “providing habitats for the existing wildlife to return.”

Looking back on the completed stages, Banks says he’s “very pleased” with the achievements thus far.

According to the developer, demand for the project has been “overwhelming” ever since it launched in September 2019, which is the ultimate barometer of success.

He remembers how the homes garnered near-instant interest when Broadoaks Park hosted over 350 guests at its off-site launch event, with all of phase 1 being reserved soon after. Now, “only a few” homes remain in phase 2, and reportedly, many buyers are now enquiring about phase 3.

“With future phases going through planning, we have been able to amend plans based on the demand and sales to date, giving us valuable feedback before we start construction,” says Banks.

He concludes: “From adding home offices to replacing semi-detached properties with detached homes, we are adapting our plans to create the most appealing homes for our target audience.” 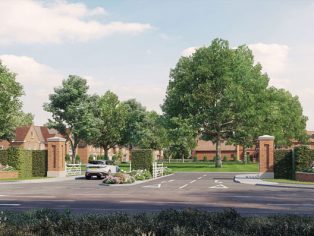