A new ‘modular typology’ for Birmingham

A new modular housing typology is being claimed for the latest phase of Urban Splash’s ‘island neighborhood’ at Port Loop in Birmingham.

According to the builder, Row House is a new take on mews-style architecture. First revealed in the spring, the design has been developed by architects shedkm, with the homes at Port Loop now featuring a grey profiled metal facade and “signature” oversized windows.

The new Row House homes will form the third phase of regeneration at Port Loop and will stand adjacent to another phase of the developer’s ‘Town House’ typology homes – 105 of which have already been created at the waterside site close to Birmingham city centre.

There will be 15 new three-storey Row House homes at the development, each with their own private garden terrace and access to a brand-new residents’ garden, a concept which has reportedly been very popular with residents in the first phases.

As with other House by Urban Splash homes, Row House is being created in the company’s factory in the East Midlands. There, homes will be precision manufactured to customer specifications, with buyers choosing from various layouts.

House by Urban Splash delivery director Chris Shaw hailed the new development, which “in two short years,” he says, has been “completely transformed.”

“What was once a disused, rundown former industrial patch of land, has fast become a vibrant, award-winning place in which hundreds of people now live, work and play,” says Chris. 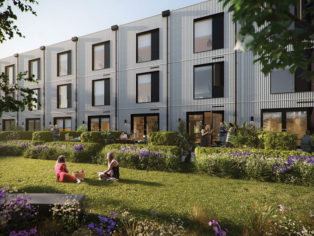