Bringing a sense of community

Plaza Collection is a ‘community’ of over 700 units being created in Mill Hill, London, with its focal point a new landscaped plaza alongside extensive commercial space. Terence Luo, director at developer Poly UK, talks to Jack Wooler about the genesis and USPs of the scheme.

Plaza Collection, in Mill Hill East, London, is transforming the former Inglis Barracks site into a vibrant new 700+ home community with ‘design-led’ new homes, gardens and a new public square that forms a new
focal point for the area. They are the work of a subsidiary of international developer Poly Development and Holding Group – Poly UK – building its first London development.

Positioned in a prime position at the entrance of Millbrook Park, Plaza Collection forms what the developer says is a “vital new gateway” between Mill Hill East Station and the wider Millbrook Park. It also opens up access to the wider site with the homes set amongst public walkways, landscaped gardens, pocket parks and a new plaza with circa 15,000 ft2 of new commercial space.

The landscaped plaza is central to the development, with a lawn, seating and areas for leisure and relaxation.

“We wanted this to become a hub for the wider area, not just our immediate residents,” says Terence Luo, director at Poly UK. “Around the plaza is the new commercial space, which the area was really lacking before.” The developer reports that it is close to agreeing tenants for these units.

Around this plaza, the homes themselves (many of which are available under Help to Buy), are in attractive mid-rise blocks clad in exposed brickwork with characterful gabled roofs, mirroring the traditional local vernacular.

Inside communal spaces, the interior design is focused on ‘bringing the outside in,’ with exposed brickwork in the concierge area and a living wall. A palette of greens nod to the site’s former military heritage and the use of natural materials creates spaces for living that are both attractive, yet highly functional.

Bringing further temptation to buyers, the homes are light-filled, with a “focus on rich interior materials and elegant finishes,” says the developer, which “gently pay homage to the site’s former military heritage.” All units benefit from either a balcony or terrace.

Residents can also access a range of amenities, such as the residents’ function room with kitchen facilities and media room, and there is a 12-hour concierge to support modern lifestyles, as well secure underground parking with electric car charging points and cycle storage.

Terence Luo says that the inspiration for project was a result of the firm discovering the site, which offered a “best of both worlds” location, and made for the ideal place for Poly to procure its first London scheme.

“It’s extremely green and surrounded by countryside, yet is only 30 minutes from central London on the northern line,” he says. “The borough of Barnet also features lots of outstanding schools – property in a good school area is historically a safe investment.”

As such, the site was acquired in 2018 – but this was not without its challenges: “The area had only been partially remediated by the seller, meaning we had to fully document and verify the earthworks and all material removed from site for verification and validation by both Barnet Council and the NHBC. This was both technically and administratively intense, to ensure all works were carried out correctly.”

Terence continues: “The construction of the project was impacted by Covid-19 related material issues; however, we stuck with our intended specification for sustainably produced materials where possible, with all the project timber coming from FSC sustainable sources and the steelwork suppliers all holding Sustainable Constructional Steels (SCS) certification.”

Throughout this process, Terence tells me that integrating with the existing community was always a key focus. “We partnered with Mill Hill County High School, providing support to ensure its popular annual concert featuring the Royal Philharmonic Orchestra could continue during the programme,” he says.

“While the pandemic brought many events to a halt in 2021, in 2022 Poly is looking to reignite its work with the school, local community groups and organisations, with exciting plans to host summer events on the plaza.”

In order to realise this project to a high standard, Bennett Construction was appointed as main contractor, and architects Chapman Taylor were brought in to design the development. Poly also engaged “globally renowned” Michaelis Boyd as interior designer for the project. Terence says this was a rare feat at this price point – with the homes starting at circa £400k with Help to Buy available – and “creates a real USP.”

He explains: “Michaelis Boyd is an award-winning architecture and interior design studio based in London and New York, with projects including Soho Farmhouse and Battersea Power Station as well as numerous high end global hotels.”

Terence also tells me that, across the initial design processes through to construction, the team were heavily focused on their low-carbon strategy, which was implemented across the development, including highly insulated and airtight building fabric, energy efficient MEP systems and the connection to a district heating network.

He explains how an ‘energy hierarchy’ approach was taken – a design approach used to reduce the energy demand of a development – resulting in a CO2 emissions reduction of 43.6% below the Building Regulations 2013 Target Emissions Rate for gas heating. The design also includes measures that will help mitigate and adapt to climate change, such as SuDS, “best practice flood resilience measures,” and use of “green infrastructure” to “minimise and mitigate heating” to the urban environment.

Further, the development improves site biodiversity thanks to its surface water attenuation, and the “utilisation of native species or species with a known benefit to wildlife.” This includes features specifically designed to benefit pollinators and other invertebrates, as well as birds, bats, hedgehogs and other wildlife.

Now, with phase one and two – comprising 129 one and two bedroom apartments – complete, with over 90% of homes sold and many residents enjoying their new community already, Terence says the feedback so far has been “fantastic.”

“The development is now the most recommended project in the area, with five stars on Google and glowing feedback from purchasers. The next phases have also just been released, to high demand.”

In order to demonstrate just how happy residents are with the homes, he provided Housebuilder & Developer with a quote from 39 year old property professional Jaiesh Makwana who purchased a top floor, two bedroom apartment with his partner who works in communications.

Jaiesh said: “We had been working really hard for the past few years and were ready for the next chapter. We were moving from Watford and wanted a suburban location that was close to the buzz of central London, but with lots of green space, which was very important to us. We discovered Mill Hill, which ticked all of our boxes – it had the perfect balance. We then stumbled upon Plaza Collection, and could see the location was excellent, right opposite the station!”

Jaiesh is also a big fan of the design: “As soon as you walk in, it’s bright and airy – the ceilings are higher than usual – which you don’t see that often in new builds these days. The colour palette, decor and fixtures are all perfect, and there is a real sense of quality throughout every aspect. There is a big private terrace which was one of the main selling points for us – it’s huge, and has excellent views as far as the eye can see. The whole development feels extremely well designed and is bringing something new to the area with the landscaped plaza.” 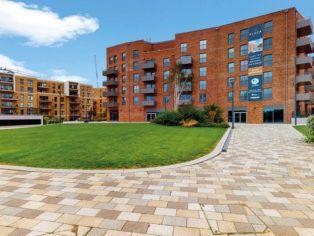 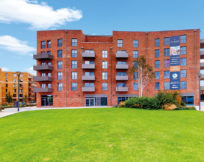