Cornish past and future

Intended to perfectly synthesise the historical and contemporary, The Nest is a boutique development that has just been launched in a picturesque Cornish village. Jack Wooler spoke to Paul Stephens of Stephens + Stephens on the design and restoration processes behind it.

The Nest is a collection of 15 unique (and thereby ‘boutique’) two, three and four bedroom homes which recently launched in the heart of a seaside village in Cornwall, Charlestown, which is a Unesco-listed World Heritage Site.

Heavily influenced by its surroundings – Charlestown’s natural valley – the project takes design cues from the area’s previous role as a seaport for the copper, clay and pilchard fishing industries. To this day it features tall ships, brightly-coloured fishermen’s cottages and time-worn cobblestones.

Paul Stephens, director of project developer Stephens + Stephens, tells me that the area’s “enigmatic aesthetic” also inspired film and TV location scouts, being most recently featured in drama series Poldark. This feel, he says, has been “baked into” the new homes, with old elements restored and refurbished, and new elements providing a “subtle nod to its surroundings,” while delivering a “new, contemporary Cornish-driven lifestyle opportunity,” he says.

While heritage benefits have been harnessed all over the project, the main focal point of the development is the 21 metre high brick chimney, which was once used as part of the furnaces used to dry the clay slurry as it was poured onto the drying beds. The chimney will now sit within a public space, rather than within a privately owned industrial site, and can be enjoyed at closer proximity by residents of The Nest and by visitors to the area.

“The historical and the contemporary perfectly synthesise in Charlestown, and in The Nest,” continues Paul. Wherever you are in this beautiful harbour port, it packs a pretty punch.” He explains further, “Textural and layered, yet quiet and calming, its industrial features are comfortable bedfellows with the dramatic natural setting.”

Designed by multi-award-winning Charlestown-based architects, Alan Leather Associates, The Nest achieves its reflection of the locality with “meaning, depth and texture,” says Stephens.

According to the developer, the entire team were resolute that the project should “harness the history and atmosphere” of the World Heritage site, including hundreds of years of clay mining. “We took a design-driven approach to ensure a cutting-edge style for today,” which also referenced the past, Paul adds. He continues, “concurrently paying appropriate homage to the original, industrial aesthetic of the area, rather than a ‘pastiche’ of the original properties.”

The housing for the former clay drying beds, formerly known as The Linhay, for example, has been “reincarnated” as a timber framed garage block. This outbuilding provides parking for all the homes’ cars; leaving the walkways and gardens vehicle-free.

“The development allowed Stephens + Stephens to take the original concept plans and transform these into 15
individual houses,” says Paul, “each offering a blend of materials sympathetic to the era when the clay lovering was in full swing and Charlestown was a thriving busy port, exporting tin and clay around the world.”

Before any of this could be achieved however, the early stages of the project were relatively straightforward, according to Paul, who says the site acquisition was “seamless,” the site being purchased with planning already approved, and an existing roadway to the site ensuring easy access and infrastructure.

“That said, however,” he continues, “we have needed to work closely with the heritage team at Cornwall Council to preserve any historical elements existing on the site, and site remediation proved challenging.”

With the plot having been derelict for some time, it was well overgrown, and there was hundreds of tons of China clay on the site that had to be removed.

Another challenge was the restoration of the chimney, which, along with all of the retained stone walls in the development, has been extensively refurbished in line with Cornwall Council’s Conservation requirements. This process involved teams of steeplejacks raking out and repointing and cleaning brickwork, while replacing any damaged structural straps and clearing out the excess vegetation that was growing inside and outside the chimney.

In addition, to further preserve the heritage, where possible, known and new features and artefacts discovered during the construction works are to be revealed and displayed publicly, giving residents and visitors the opportunity to experience the vital heritage that has been re-found and carefully collected during the build process.

The Nest will be accessed by a private road and is surrounded by a traditional stone wall on three sides, with large evergreen and deciduous trees forming
a dense, natural screen between the neighbouring properties.

The homes are topped with living grass roofs and outside, ‘rubble’ stone walkways lead the way into “calming, sustainable gardens.”

The green roofs extend the length of the houses, bringing a new natural life to what was previously a harsh industrial space, and tying in with the wildflower planting around the project’s perimeter.

Each home also has two ‘car ports’ in the extended garaging space across from the properties, and an additional shared bike shed will be available, taking up to six cycles for residents.
To the rear of the Linhay car park building will be a tiered natural habitat designed and planted to encourage wildlife and flowers to grow with viewing areas for the residents to enjoy. There will also be discreet areas for cycle storage formed.

The houses themselves are based on a timber frame construction, with a combination of timber, slate and metals used in the facades and roofs.

Inside this frame, Paul tells me that the turnkey interior design service from Absolute worked hand-in-hand with the Stephens + Stephens Home concierge service, “meaning buyers can literally walk right into your new home with every single detail and appliance already in place.”

“The Absolute team was inspired by the industrial heritage of the surrounding area, rather than directed by it,” says Paul. “As with the architecture, a clean, contemporary interior style is mixed with industrial hardware and surfaces, with on-trend muted colour palettes reflecting the landscape and elements.”

“A natural flow of life, light, energy and the elements is evident throughout all of the houses,” adds Stephen, noting the powder-coated aluminium windows and patio doors set into the profiled metal-clad sheeting, timber and ‘rubble’ external material mix, further tying the homes into their surroundings.

The homes incorporate air source heat pumps, which combined with the aforementioned green roofs provide “an attractive yet environmental complement” to many of the properties.

Looking back on the project, Paul believes that Stephens + Stephens’ design-driven approach to new developments has ensured that the same level of quality is experienced within each of the homes at The Nest.

The overarching design philosophy, while paying appropriate homage to the original, industrial aesthetic of the area, was also to “avoid a ‘pastiche’ of the original properties,” says Stephens.

He admits that, “as with any development” there has been some “local community ‘reaction” in this much-loved location. However overall, Stephens says the project has been “positively received” by the community, reportedly receiving less opposition than most schemes where planning was achieved before the site was purchased.

A strong sign of the project’s success so far, Paul says “there has been a rush for sales,” with over 50% of the development having been sold already (subject to contract).

He believes that his firm has delivered a clear point difference, in the current busy development context. “With so many new build developments being commissioned these days,” he concludes, “we like to think that our unique approach is a refreshing reminder of what can be achieved with the right minds involved.” 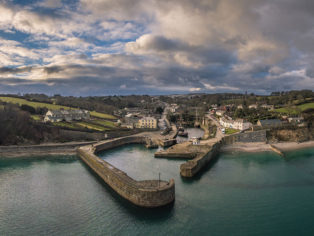 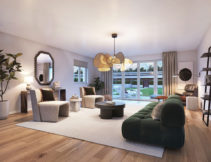 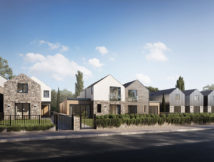 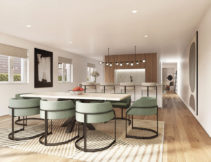