A new 264 home greenfield development is well underway in Devon, inspired by ‘Arts and Crafts’ design of the early 20th century, and the site’s landscape. Jack Wooler explores a project which also foregrounds modular innovation

A new community of 264 high quality homes is being constructed near the seaside town of Exmouth, Devon. It features tree-lined streets and ‘Arts and Crafts’ inspired homes that are designed to complement the adjacent neighbourhood.

The centrepiece is a curved crescent of 18 terraced homes overlooking a public hilltop park – known locally as Donkey Hill. Each of these homes feature rooms in the roof, providing additional space for prospective purchasers – achieved through modern methods of construction (MMC).

The whole of the development is grouped around Donkey Hill, which has sightlines to the sea. New residents will benefit from this alongside over 14 acres of open space near to the development, as well as walking trails on site, new hedges, woodland, and flowers planted to support the native wildlife.

Among the many selling points for buyers are its proximity to the Devon countryside, connections to local amenities in Exmouth and Plymouth, and community facilities which the developer has planned in. These include a children’s play area, a community orchard, and 40 allotment pitches.

Working alongside LHC Design – lead ‘urban designers’ on the project as well as architects and landscape architects – the team developed a “landscape-led” masterplan including a “well connected green infrastructure network,” sustainably supporting residents.

According to its designers, the masterplan is intended to build upon the character of the adjacent ‘The Avenues’ Conservation Area, reflect the local identity, and embody “the best of parkland estates and garden suburbs.”

To enact this, the scheme centres around a Landscape Framework, which comprises the central hilltop, landscaping and outdoor amenities, alongside generous garden spaces for the houses.

The open space provided Suitable Alternative Natural Greenspace which, as well as giving the community an asset, helped the team to relieve pressure on the nearby Exe Estuary Spa, and meet the necessary mitigation measures of the Special Protection Area. This would have otherwise incurred “costly” offsite mitigation payments, say the developers.

Furthering this, accessibility to the countryside is set to be improved for all in the area, with new footpath links, enhanced hedgerow and wildlife habitats, and other improved biodiversity measures.

Just as the building’s plan and landscaping blends with its environment, the housebuilder reports that each property at Plumb Park has been designed to be in keeping with the traditional features of Devon, with the goal being to create “character-filled” homes.

A range of house types are on offer from two bed apartments to four bedroom houses, all with varying floor plans, sizes, amenities, and personalised kitchen, bathroom and flooring options.

At the large end, ‘the Exmouth’ is a four bedroom house type with a living room/dining area with a door to the rear garden, a separate kitchen, and a downstairs cloakroom. On the first floor are two bedrooms, one of which is double, both served by a family bathroom. Finally, on the second floor, the master bedroom can be found alongside the fourth bedroom.

In comparison, one of the smallest typologies is ‘The Bovington,’ which offers a range of two bedroom apartments, each having an open plan living, kitchen and dining area, with french doors, plus two double bedrooms and a family bathroom.

Whatever the floor plan, each is designed to offer bright, open rooms. All homes have reportedly been built to high energy efficiency standards, as well as with exteriors designed to match the local vernacular.

According to the developer, one of the biggest hurdles faced in the project was how to build the centrepiece curved terrace, which Simon Gill of Taylor Wimpey says “was always going to be a big challenge.”

This crescent of 18 homes is a nod to the ‘Arts and Crafts’ style aimed for, and it is intended to define the development by providing a focal point for the other houses to relate to. In addition, with the road following the curve, it helps to create a more “natural flow” through the development, says the developer.

This ‘focal point’ needed careful consideration however in terms of design and engineering, with the roof structures being one of the most complicated aspects.

The complications largely arose in making straight timber appear as if it is effectively bending, and in addition to this the gable roofs on the terraced houses had a triangular apex projection on the front elevation, which also necessitated a curved design. Further, there was a desire from the developer for the roof spaces to function as usable rooms.

The team at Taylor Wimpey looked at a number of options to achieve these aims, including onsite construction as well as offsite fabrication of the roof structures. Managing this onsite however would have reportedly been a “huge” technical challenge for the joinery contractors, where the controlled environment of offsite meant this was the most viable option.

To address this, the housebuilder approached Smartroof, which was able to demonstrate that its offsite fabrication facility had the technical resources to deliver this aspect of the project.

The system chosen is described by Smartroof as a “complete roof solution,” offering housebuilders the ability to maximise sellable space by placing rooms in roofs. It comprises a series of factory produced elements incorporating insulated roof panels, spandrel wall panels, dormers, roof windows, dummy chimneys, soffits and fascias – all delivered to site and craned into place, with the roof then just requiring tiling.

“At a time when skills shortage and tight margins are commonplace across the sector, the offsite fabrication of the roofs at Plumb Park provided Taylor Wimpey with huge benefits in terms of health and safety, speed of construction and quality control,” says Kevin Sherlock, managing director at Smartroof. He adds: “To create the curved structure would have been complicated to achieve onsite, using traditional roofing methods, however we were able to manufacture this complex configuration offsite.”

Sherlock estimates that, for this bespoke design, the system saved up to eight weeks installation time when compared to traditional onsite methods of roof construction. In addition, hips, valleys and other roof details could all be designed and manufactured as features within the system.

The benefits of modular

There has been a push recently to increase the use of offsite fabrication and systems across the sector in a push to encourage greater efficiency and higher productivity. Systems such as structurally insulated panels (SIPs) and pre engineered insulated roof systems as the ones used at Plumb Park are becoming ever more common.

Discussing the success of MMC’s (modern methods of construction) use in this project, Sherlock believes more housebuilders will need to embrace newer and faster methods of construction in the near future, “which in turn will enable them to comply with more stringent energy efficiency demands and help the UK meet its net zero targets.”

Sherlock says: “The industry is beginning to rethink the way it designs, engineers and constructs buildings, and is helping to deliver projects quicker, better, and with a greater degree of precision.”

Among the benefits the approach brought to this project, he notes the sustainability credentials of offsite construction, with waste being easier to manage at the development as factory production provides a greater control of material usage. “This is compounded by the core component of this particular system being timber,” adds Sherlock, “which itself is sustainable.”

Further benefits of the technology’s use in this project included less time spent working at height and erecting scaffolding in confined spaces for site operatives, reduced vehicle movements onsite, and less manual handling during installation. In addition, the risk associated with failing blockwork from exposed gable walls was eliminated, thereby making the construction process safer.

With the challenging crescent now complete, and the development expected to reach completion by the end of 2022, Taylor Wimpey hails the Plumb Park as a successful example of the integration of modular construction. As well as enabling the team to reduce build costs, and health and safety risks onsite, it has reportedly achieved higher thermal efficiency and build quality.

Dale Saunders, technical compliance director at the housebuilder, says that it “not only helped Taylor Wimpey simplify the build process,” but enabled “innovative solutions” that made the project possible.

Looking forward, Saunders says that Taylor Wimpey will continue to work to review and consider how the approach can be used to surmount obstacles on schemes, “including those challenges that will be faced through the upcoming changes to be introduced through Part L of the Building Regulations.” 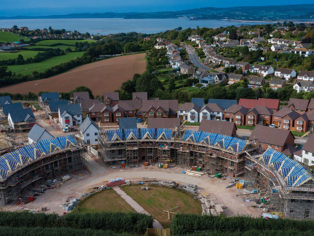