David Stagg of Graf UK looks at a key environmental responsibility issue which is hitting developments across the UK – namely nutrient over-enrichment from sewage – and what housebuilders can do to address the issue.

Two years ago, Natural England advised a number of local authorities in the Solent catchment area to halt the determination of planning applications unless the developments could prove they were ‘nutrient neutral.’ Concerns about the effects of nutrient over-enrichment within some European-designated nature conservation areas, including those in the Solent and Poole Harbour, have existed for many years.

However, Natural England has now updated its advice on the complex issue following a judgement by the European Court of Justice in two linked cases related to the EU Habitats Directive; these are now known as the Dutch nitrogen case, or even more simply, the Dutch case.

The ruling has meant even greater scrutiny of the water quality of Special Areas of Conservation (SAC) and Special Protection Areas (SPA) across the UK, with the building of residential properties particularly being linked to excess nutrients entering nearby water sources.

High levels of these nutrients, which come directly from wastewater treatment discharges and indirectly from farm drainage/runoff, and sewage or silage systems, enter streams and rivers, causing excessive growth of green algae which smothers rare habitats and wildlife.

While the construction industry largely ignored the advice at the time, thousands of planning applications (for tens of thousands of much-needed new homes) now remain on hold while housebuilders and developers struggle to find a long-term viable solution. Some local authorities are even dismissing appeals for single dwellings if the schemes cannot be shown to be nutrient neutral.

Morgan Sindall even managed to persuade Hampshire County Council that its Later Living £13m Addenbrooke extra-care scheme in Gosport could be nutrient neutral with the installation of water-saving flow regulators, at a cost of £50,000.

Another idea is to take farmland out of agricultural production and get developers to turn it into nature reserves – against which they could buy credits to offset their nitrate discharge. It’s a slant on carbon neutrality, but comes at a cost to them of £1,235 per kilo of nitrogen. And this is not an option for brownfield sites because they will not result in any agricultural land being taken out of production.

However, a long-term viable solution already exists. The development of this technology was implemented more than 15 years ago in Scandinavia, where the phosphate element of nutrient elimination is already common practice.

More than 5,000 wastewater treatment systems with this technology have already been supplied into Scandinavia to meet these challenging discharge constraints (as with the more challenging nitrate removal in Sweden). This includes achieving an independently tested (PIA GmbH) 0.4mg/l of phosphate removal, only days after commissioning.

Reductions in phosphates as low as 0.2mg/l have been achieved on an installation at the award-winning Scottish attraction Loch Leven’s Larder – a working farm, restaurant, deli, gift shop and playground on the banks of Loch Leven, which attracts more than 300 visitors a day in high season. Renowned for its wintering and breeding wildfowl, the Loch has been designated an EU Special Protection Area by SEPA (the Scottish Environment Protection Agency).

To comply with SEPA’s particularly stringent phosphate and nitrate discharge requirements, the attraction needed to replace its deficient wastewater treatment system with one that limited phosphate discharge to 2 mg/l. The new system is now up and running and is operating to 0.2 mg/l.

Either a single-chamber tank featuring a single pumping process, or a split chamber version which utilises multiple pumping processes, can be specified. The system’s performance has proven extremely effective, processing the waste up to a 99% treatment coefficient. The technology can also be combined with precast concrete tanks. Both tank options use sequence batch reactor (SBR) airlift technology; widely recognised as being highly efficient for wastewater treatment and resulting in extremely low volumes of sewage sludge.

The process is wholly controlled in the tank, with precipitants attaching themselves to the phosphate so they sink to the bottom of the chamber for removal by normal desludging.

Another benefit of more advanced systems is having ‘underload’ detection as standard – this can enable efficient operation with up to 75 per cent underload. This is a benefit particularly for second homes which are often left unoccupied for long periods of time.

Carbon dosing is an additional option which can aid nitrate removal by adding a carbon (sugar) solution to the system which feeds/stimulates the micro-organisms, so they continue to produce high-quality effluent during underload. If the system is likely to drop below the 75% underload threshold, the dosing makes up the shortfall to ensure low-odour and even odourless treatment and extended times between tank emptying.

Natural England’s focus on nutrient neutrality is now moving from Hampshire to Herefordshire, Kent, Dorset and Somerset (where there are currently 1,000 developments on hold), forcing some local planning authorities to propose their own, immediate/short-term solutions. And Natural Resources Wales (NRW) are believed to be taking on nutrient neutrality across the whole country, centred around 11 river regions. It’s just as well a long-term viable solution is available that knows no borders!

David Stagg is a technical product specialist at Graf UK 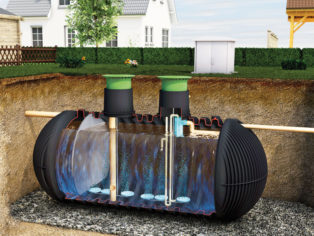 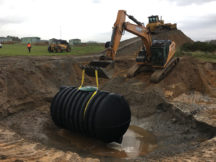