Going with the flow

Martin Lambley of Wavin assesses the predicted impact of new Sewers for Adoption drainage guidelines, and what they mean for the future of SuDS.

New guidance for the design of adoptable drainage is set to be published later this year. Widely described as Sewers for Adoption 8 (SfA8), the manual will be published under a new Design Construction Guidance title and is expected to come into force in April 2020. For the first time, the guide will outline standards when it comes to the ‘adoption’ of sustainable drainage systems (SuDS) by water companies across the country. But does it go far enough?

As the frequency and severity of flooding continues to rise, it’s becoming ever clearer that the solution to the UK’s drainage needs no longer lies in collecting surface water from developments using pipes and releasing it into rivers. It simply isn’t sustainable. In light of this, SfA8 is setting out new standards for SuDS, clarifying what is expected of developers if their drainage systems are to be adopted by water and sewerage companies (WaSCs) across the country.

To allow sufficient time for WaSCs, planning authorities and developers to update their policies and procedures to comply with the new manual, a pre-implementation version of SfA8 was published in 2018. Since its publication, WaSCs have been considering a range of SuDS techniques that improve greatly on existing assets, namely oversized pipes and tanks. These more sustainable techniques include swales, basins and geocellular systems, which are installed under green areas and are made up of modular crates that control surface water runoff either as a soakaway or a storage tank.

The benefits of SuDS are many – not only do they ensure flood resilience, but they also improve the urban environment through improved air quality and biodiversity. For these reasons, SuDS have been used since the mid-90s, and became an integral part of policy in 2014. However, despite these benefits, they are still not a mainstream feature of urban developments.

been the lack of any formalised route to adoption, along with the perception that SuDS require additional maintenance when compared with conventional piped drainage systems. A lot of it comes down to pragmatism, too – where it’s cost effective and quick to install SuDS, they will often be implemented; however, if a more practicable option is available, developers will often default to more traditional methods.

What SfA8 will do is provide a long overdue route to adoption in a way that allows water quality, amenity and biodiversity, as well as water quantity, to be properly considered and integrated into the surface water management and urban design process. But before we hail SfA8 as the silver bullet to bring about monumental change, it’s important to evaluate its shortcomings.

Are the new guidelines strong enough?

Of course, any efforts made to improve the sustainability of UK drainage is a step in the right direction, and it’s promising that under SfA8 designers will need to fully consider installation, health and safety risk assessments, maintenance and access requirements of both hard and soft SuDS as part of their designs.

However, there are convincing arguments to say that SfA8 doesn’t take regulations far enough to enforce any tangible change. For example, key SuDS components such as permeable pavements and green roofs, are not covered in the document, and there are concerns over how strongly the standards can be enforced.

Although the document is expected to be mandated by Ofwat, making it stricter than previous editions, the way it’s worded could create grey areas and wiggle room around certain aspects of adoption. For example, many water companies have been against geocellular tanks traditionally, claiming they are difficult to maintain or inspect compared to pipes. While this is not the case, old habits do die hard, and moving towards a sustainable-first mindset won’t be easy without tight control.

The progress made in achieving more sustainable drainage across the UK is certainly encouraging. In 2018, the Government launched its 25-year surface water action plan, albeit lacking in practical advice. This, coupled with SfA8, is a clear indicator of the increased efforts being made at all levels – from agencies to government bodies – to safeguard the future of drainage against increased environmental strains. We’re no doubt closer than ever to SuDS losing their status as a special consideration and instead being an integral, standard component of all new developments.

Increasing conversations about SuDS with WaSCs over the past couple of years are a strong indication that we’re moving in the right direction. While this shifting mindset is undoubtedly positive, in a country facing ever worsening floods, change cannot come soon enough. As an industry, we need to unify and put SuDS firmly at the top of our agenda to safeguard our future.

Martin Lambley is product manager for stormwater management at Wavin 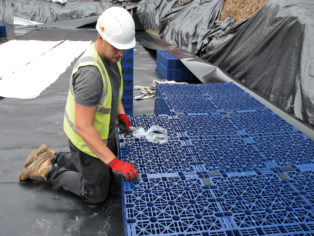