Excavations prior to a much anticipated development in Cambridgeshire have unearthed a rich history, including Bronze Age skeletons and pottery. Council partnered developer This Land explains the benefits of this major scheme to Jack Wooler.

A large-scale new development is beginning to make headway near Cambridge following a major archaeological dig, which has uncovered remains and artefacts dating back to 1200 BC.

Developer This Land says that once complete, Millstone Park will form a “community” of 350 new homes. Including both affordable and private housing, it features a mix of spacious family homes as well as self-build plots.

The project has been formed on a 6.5 hectare site on the eastern edge of the village of Burwell, 10 miles north east of Cambridge. Being a greenfield site, the developer has had to conduct a series of surveys to satisfy local residents’ demands, and jump through a number of planning hoops to limit perceived impact on the environment.

As part of meeting the former aim, the proposed development has been designed carefully to meet the needs of both new and existing residents. Intended to embrace the “unique character of Burwell” and the significant nearby areas of green open space, the plans incorporate several village greens, recreational areas for local children and teenagers, and an extensive network of pedestrian and cycle paths.

At the conclusion of the archaeological dig, which began in May 2021, This Land is now set to commence the development’s main infrastructure.

The project is one of a number of sites in Cambridgeshire that have been acquired by This Land, a firm established by Cambridgeshire County Council, its sole shareholder.

This Land will undertake a master developer role on the site, in securing planning, technical approvals and delivery of the spine road and infrastructure through the development, with utilities diversions through the new junction to be formed off Newmarket Road and spine road construction commencing in early 2022.

With an absence of existing infrastructure on and around the site, there was significant potential for the project to increase the visual impact on views from the surrounding area. The planning authority has kept a particularly keen eye on the project because of this.

Appropriate landscape buffers were therefore required to mitigate this risk in the landscape masterplan, particularly on the northern and eastern boundaries.

Complicating things further however was a listed building to the south-west corner within Melton Farm, which meant that any development on this part of the site needed to be sensitive to the heritage asset.

Helping somewhat on the other boundaries is the character of the existing residential edge of Burwell, directly adjacent to the site, which has one of the more modern developments. This lent itself more readily to additional housing of an appropriate scale, which would also provide potential improvements to the settlement edge.

Although elements of the eastern settlement edge are currently partially screened by trees, the proposed scheme could enhance the existing stark, geometric settlement edge with a softer, vegetated boundary comprising public open space, with filtered views through tree belts and reinstated hedgerows.

With the boundaries agreed, and the visual impact attenuated, the design team began the process of designing the look and feel of the homes. According to This Land, the team’s approach to designing homes is to take every site and project on its own merits, with each of the company’s schemes being designed to reflect the local vernacular, the community, and the target customer base.

As such, This Land does not have a set style, with the company more focused on embracing a sustainable approach to building. This reportedly includes creating places that benefit the community and people living in them, as well as those that will use them in the future.

Despite this somewhat agnostic approach to style, the company does embrace traditional designs where appropriate. Due to Millstone Park’s edge of village location, this project is set to be of a more classic design that is intended to align with and enhance the distinctive character of Burwell.

With a design in mind, research was conducted to support a planning application for the ambitious new development, designed to understand buyers’ thoughts, views, and factors that influence purchasing.

The research included a series of face-to-face focus groups, which saw dialogue with potential home buyers about the proposed scheme. Providing the team with valuable insights to help shape the scheme, potential buyers were interested in a “deviation from the traditional in terms of layout and facade material,” said the developer, and were “highly focussed on the relationship of the homes with the open spaces, and the implementation of roads and parking especially.”

While the group brought up a number of other criteria, such as sustainability, gardens, built-in technology, low maintenance, and energy efficiency, interestingly it was acoustics that were one of the most talked about criteria when looking at buying a new house. According to This Land, this is partly driven by the fact people are spending more time at home working, making peace and quiet increasingly important.

As such, the team soon realised that the proposed ‘indicative layout’ of the development – as is now shown on the Development Framework Plan approved at the outline application stage – would have to take residential amenity into consideration. It would also provide a landscaping buffer adjacent to the existing properties.

This Land proposed using ‘Melton Fields’ for this purpose – between the existing farm and the properties. At the detailed design stage, the team also carefully considered the layout and orientation of the buildings close to the farm.

Before the team could begin construction, however, an archaeological dig being conducted during the design and planning processes unearthed significant findings dating as far back as the Bronze Age. This didn’t take the team entirely by surprise; the site had previously been identified as a possible Bronze Age settlement, and therefore an archaeological dig was required from the very beginning.

Following the extensive excavations across the site over a nine month period, however, archaeologists discovered two complete human and horse skeletons as well as a vast number of post holes, pits and pieces of pottery which date from 1200-350 BC.

This indicated that a large and established community used to live at the site, while the holes’ layout implies the timber structures would have been both round and rectangular in shape. The team also uncovered a substantial number of pits containing animal bones and broken pottery, suggesting they had been used for throwing away unwanted food remains and other goods.

With the fieldwork now complete, there will be a programme of post-excavation assessment and analysis of the artefacts and environmental samples which will be recorded and followed by a full publication of the results. The information will be built into a ‘story of the site’ and archived, and the artefacts will be donated to Cambridge County Council and made available for public viewing.

With the dig nearing completion, This Land is now looking forward to beginning construction.

In line with one of the company’s approaches to designing schemes, the company also veers away from a ‘set’ build approach, instead looking at every scheme differently, and considering which build methods best suit each. They employ both traditional brick and block builds as well as more modern methods like timber and steel frame.

At its Cityglades development in Cambridge, for example, the team has incorporated a number of innovations in housing design that are geared towards reducing the demand for energy, while creating modern, comfortable spacious homes. One way in which this has been achieved is in the specification of preinsulated Durisol ICF blocks, made of 80% recycled timber, designed to offer a faster construction method, and maximise the thermal mass benefits of the building envelope.

This Land is already very focussed on ensuring that the above process is performed as sustainably as possible, and have set out a list of goals to ensure that the development affects the ecology as little as possible.

The company is looking at how to achieve net zero over the coming years, beginning with meeting the Government’s Future Homes Standard. One way in which this is being implemented now is in the adoption of renewable technologies such as air source heat pumps, and another is in its mission to adopt a more landscape-led approach putting planting and open green spaces at the top of the agenda.

At Millstone Park specifically, some such goals have already been met in the planning stages, though not without some difficulty. One such challenge achieved was to ensure ecological enhancements could be created, including new hedgerows and trees. This is intended to improve biodiversity, as well as address the Chalklands Landscape Character Area thereby reversing the intensification of agricultural practices and resultant loss of hedgerows.

Another element of sustainability incorporated into the planning applications is the project’s SuDS system, which will be designed throughout the site to contribute to the creation of ecological corridors, as well as mitigate flood risk.

Throughout the project to date, This Land has carried out close engagement with key stakeholders, including conversations and meetings with the Parish Council and letters to local residents, taking in comments on the plans and feedback on the preferred way forward.

In fact, the team reports its primary goal as being “outreach to as much of the community as possible.” The archaeological dig for example was used as an opportunity to engage with stakeholders wider than residents, as well as to secure press coverage to illustrate the progress the company was making in delivering the new scheme.

This Land believes it has succeeded in that already, having already welcomed over 200 local visitors to the site during a number of open days, with visits from classes from the local primary school, archaeology groups, Burwell Museum, councillors, and Burwell residents.

With reportedly warm feedback on the whole, Millstone Park is on a fast track to become a well-loved part of the local community, heralding a new era for the historic site. 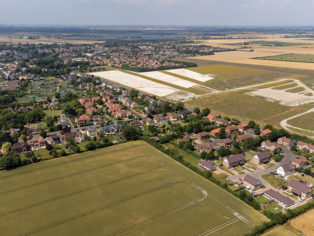