The team behind Maidenhill has officially laid the foundations of a new partnership with an East Renfrewshire charity.

Homebuilders CALA Homes (West) and Taylor Wimpey West Scotland, have pledged a series of donations to East Renfrewshire Good Causes for the duration of the first phase of building works at the new development.

For each of the first 185 homes reserved within the new community, a £50 donation will be made to the charity, which is dedicated to supporting a range of worthy local causes.

This pledges a total of £9,250 which will be used to help people in need across the East Renfrewshire area.

East Renfrewshire Good Causes, which is run by Russell MacMillan of Newton Mearns, has helped thousands of locals since it started its work in 2007.

The charity was originally set up so that Russell could raise the money to ‘repay’ the £70,000 cost of a life-saving double transplant he received in 2007, but has continued beyond to raise and donate more than £356,260 within the local area in addition to products and services which equate to the same value again – helping upwards of 1,800 residents.

Liana Canavan, Sales and Marketing Director for CALA Homes, said: “It means a lot to be able to give back to the local area in which our new community is going to be based, and – together with Taylor Wimpey – we’re delighted to pledge more than £9,000 to help a local cause that we know is close to so many people’s hearts.”

Audrey Ross, Sales and Marketing Director for Taylor Wimpey West Scotland, said: “East Renfrewshire Good Causes reaches out to, and helps, so many people across the local area – and many people are more than aware of the fantastic work Russell does. By donating a guaranteed amount for every home reserved throughout the first phase of the build, it means that those who decide to live within our new community will have given much-needed help to their neighbours, even before moving in.”

“I’m thrilled to call the team at Maidenhill partners of the charity. The money raised will go towards a number of causes across the region, whether it’s helping the homeless, or local families struggling to make ends meet.

“East Renfrewshire Good Causes is all about providing grass roots support to the local community, and it’s incredible to see CALA Homes and Taylor Wimpey keen to get involved at such a local level.”

Prospective customers interested in finding out more about Maidenhill, and keen to follow its progress, can log on to www.maidenhill.scot for information and to register for updates.

Further details on East Renfrewshire Good Causes can be found at www.ergoodcauses.co.uk 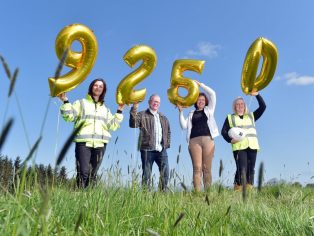